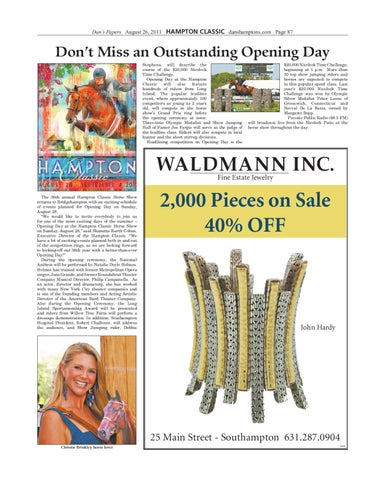 Don’t Miss an Outstanding Opening Day Stephens, will describe the course of the $20,000 Nicolock Time Challenge. Opening Day at the Hampton Classic will also feature hundreds of riders from Long Island. The popular leadline event, where approximately 100 competitors as young as 2 years old, will compete in the horse show’s Grand Prix ring before the opening ceremony at noon. Three-time Olympic Medalist and Show Jumping Hall of Famer Joe Fargis will serve as the judge of the leadline class. Riders will also compete in local hunter and the short stirrup divisions. Headlining competition on Opening Day is the

The 36th annual Hampton Classic Horse Show returns to Bridgehampton with an exciting schedule of events planned for Opening Day on Sunday, August 28. “We would like to invite everybody to join us for one of the most exciting days of the summer – Opening Day at the Hampton Classic Horse Show on Sunday, August 28,” said Shanette Barth Cohen, Executive Director of the Hampton Classic. “We have a lot of exciting events planned both in and out of the competition rings, as we are looking forward to kicking-off our 36th year with a better-than-ever Opening Day!” During the opening ceremony, the National Anthem will be performed by Natalie Doyle Holmes. Holmes has trained with former Metropolitan Opera singer, Joan Grande, and former Roundabout Theater Company Musical Director, Philip Campanella. As an actor, director and dramaturg, she has worked with many New York City theater companies and is one of the founding members and Acting Artistic Director of the American Bard Theater Company. Also during the Opening Ceremony, the Long Island Sportsmanship Award will be presented and riders from Willow Tree Farm will perform a dressage demonstration. In addition, Southampton Hospital President, Robert Challoner, will address the audience, and Show Jumping rider, Debbie