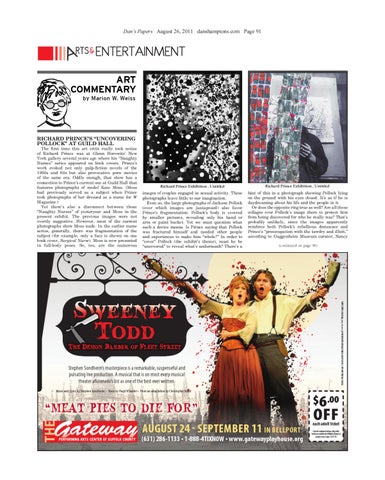 The first time this art critic really took notice of Richard Prince was at Glenn Horowitzâ&#x20AC;&#x2122; New York gallery several years ago where his â&#x20AC;&#x153;Naughty Nursesâ&#x20AC;? series appeared on book covers. Princeâ&#x20AC;&#x2122;s work evoked not only pulp-fiction novels of the 1950s and 60s but also provocative porn movies of the same era. Oddly enough, that show has a connection to Princeâ&#x20AC;&#x2122;s current one at Guild Hall that features photographs of model Kate Moss. (Moss had previously served as a subject when Prince took photographs of her dressed as a nurse for W Magazine.) Yet thereâ&#x20AC;&#x2122;s also a disconnect between those â&#x20AC;&#x153;Naughty Nursesâ&#x20AC;? of yesteryear and Moss in the present exhibit. The previous images were not overtly suggestive. However, most of the current photographs show Moss nude. In the earlier nurse series, generally, there was fragmentation of the subject (for example, only a face is shown on one book cover,Â Surgical Nurse). Moss is now presented in full-body poses. So, too, are the numerous