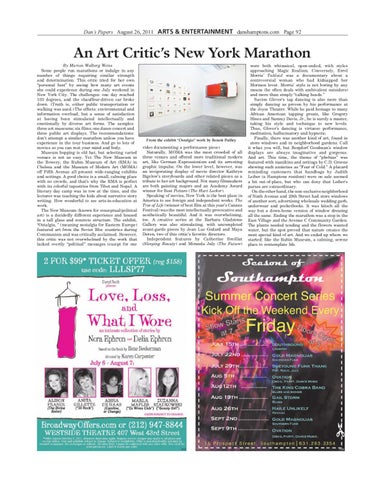 An Art Critic’s New York Marathon By Marion Wolberg Weiss Some people run marathons or indulge in any number of things requiring similar strength and determination. This critic tried for her own “personal best” by seeing how many art events she could experience during one July weekend in New York City. The challenges: one day reached 103 degrees, and the chauffeur-driven car broke down. (Truth is, either public transportation or walking was used.) The effects: environmental and information overload, but a sense of satisfaction at having been stimulated intellectually and emotionally by diverse art forms. The samples: three art museums; six films; one dance concert and three public art displays. The recommendations: don’t attempt a similar marathon unless you have experience in the tour business. And go to lots of movies so you can rest your mind and body. Museum hopping is old hat, but selecting varied venues is not as easy. Yet The New Museum in the Bowery, the Rubin Museum of Art (RMA) in Chelsea and the Museum of Modern Art (MOMA) off Fifth Avenue all present wide-ranging exhibits and settings. A good choice is a small, calming place with no crowds, and that’s why the RMA is perfect with its colorful tapestries from Tibet and Nepal. A literary day camp was in tow at the time, and the lecturer was teaching the kids about narrative story writing. How wonderful to see arts-in-education at work. The New Museum (known for conceptual/political art) is a decidedly different experience and housed in a tall glass and concrete structure. The exhibit, “Ostalgia, ” (meaning nostalgia for Eastern Europe) featured art from the Soviet Bloc countries during Communism and was critically acclaimed. However, this critic was not overwhelmed by the work that lacked overtly “political” messages (except for one

video documenting a performance piece). Naturally, MOMA was the most crowded of all three venues and offered more traditional modern art, like German Expressionism and its arresting graphic impulse. On the lower level, however, was an invigorating display of movie director Kathryn Bigelow’s storyboards and other related pieces as a tribute to her art background. Not many filmmakers are both painting majors and an Academy Award winner for Best Picture (The Hurt Locker). Speaking of movies, New York is the best place in America to see foreign and independent works. The Tree of Life (winner of best film at this year’s Cannes Festival) was the most intellectually provocative and aesthetically beautiful. And it was overwhelming, too. A creative series at the Barbara Gladstone Gallery was also stimulating, with uncompleted avant-garde pieces by Jean Luc Godard and Maya Deren, two of this critic’s favorite directors. Independent features by Catherine Breillat (Sleeping Beauty) and Miranda July (The Future)

were both whimsical, open-ended, with styles approaching Magic Realism. Conversely, Errol Morris’ Tabloid was a documentary about a controversial woman who had kidnapped her Mormon lover. Morris’ style is not boring by any means (he often deals with ambivalent outsiders) and more than simply “talking heads.” Savion Glover’s tap dancing is also more than simply dancing as proven by his performance at the Joyce Theatre. While he paid homage to many African American tapping greats, like Gregory Hines and Sammy Davis, Jr., he is surely a master, taking his style and technique to new levels. Thus, Glover’s dancing is virtuoso performance, meditation, hallucinatory and hypnotic. Finally, there was another kind of art, found in store windows and in neighborhood gardens. Call it what you will, but Bergdorf Goodman’s window displays are always imaginative and gorgeous. And art. This time, the theme of “phobias” was featured with manikins and settings by C.D. Greene showing such anxieties as “Fear of Cold.” A placard reminding customers that handbags by Judith Leiber (a Hamptons resident) were on sale seemed a bit out-of-place, but who can deny that Leiber’s purses are extraordinary. On the other hand, the non-exclusive neighborhood of Sixth Avenue and 29th Street had store windows of another sort, advertising wholesale wedding garb, underwear and pocketbooks. It was kitsch all the way but a down-home version of window dressing all the same. Ending the marathon was a stop in the East Village and the Avenue C Community Garden. The plants needed tending and the flowers wanted water, but the spot proved that nature creates the most special kind of art. And we ended up where we started: like the Rubin Museum, a calming, serene place to contemplate life.