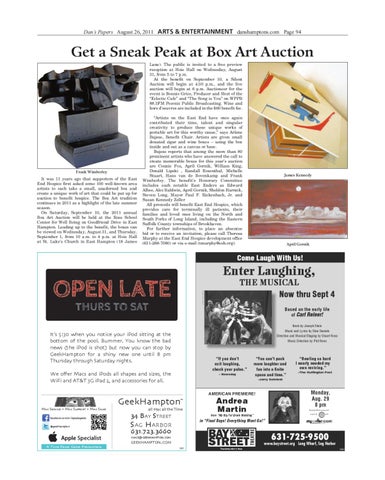 Get a Sneak Peak at Box Art Auction

It was 11 years ago that supporters of the East End Hospice first asked some 100 well-known area artists to each take a small, unadorned box and create a unique work of art that could be put up for auction to benefit hospice. The Box Art tradition continues in 2011 as a highlight of the late summer season. On Saturday, September 10, the 2011 annual Box Art Auction will be held at the Ross School Center for Well Being on Goodfriend Drive in East Hampton. Leading up to the benefit, the boxes can be viewed on Wednesday, August 31, and Thursday, September 1, from 10 a.m. to 4 p.m. at Hoie Hall at St. Lukeâ&#x20AC;&#x2122;s Church in East Hampton (18 James

Lane). The public is invited to a free preview reception at Hoie Hall on Wednesday, August 31, from 5 to 7 p.m. At the benefit on September 10, a Silent Auction will begin at 4:30 p.m., and the live auction will begin at 6 p.m. Auctioneer for the event is Bonnie Grice, Producer and Host of the â&#x20AC;&#x153;Eclectic Cafeâ&#x20AC;? and â&#x20AC;&#x153;The Song is Youâ&#x20AC;? on WPPB 88.3FMÂ Peconic Public Broadcasting. Wine and hors dâ&#x20AC;&#x2122;oeuvres are included in the $60 benefit fee. Â  â&#x20AC;&#x153;Artists on the East End have once again contributed their time, talent and singular creativity to produce these unique works of portable art for this worthy cause,â&#x20AC;? says Arlene Bujese, Benefit Chair. Artists are given small donated cigar and wine boxes â&#x20AC;&#x201C; using the box inside and out as a canvas or base. Bujese reports that among the more than 80 prominent artists who have answered the call to create memorable boxes for this yearâ&#x20AC;&#x2122;s auction are Connie Fox, April Gornik, William King, Donald Lipski , Randall Rosenthal,Â Michelle Stuart, Hans van de Bovenkamp andÂ Frank Wimberley. The benefitâ&#x20AC;&#x2122;s Honorary Committee includes such notable East Enders as Edward Albee, Alec Baldwin, April Gornik, Sheldon Harnick, Steven Long, Mayor Paul F. Rickenbach, Jr. and Susan Kennedy Zeller. All proceeds will benefit East End Hospice, which provides care for terminally ill patients, their families and loved ones living on the North and South Forks of Long Island, including the Eastern Suffolk County townships of Brookhaven. For further information, to place an absentee bid or to receive an invitation, please call Theresa Murphy at the East End Hospice development office (631-288-7080) or via e-mail (tmurphy@eeh.org).Â

Come Laugh With Us!

THE MUSICAL Now thru Sept 4 Based on the early life of Carl Reiner! Book by Joseph Stein Music and Lyrics by Stan Daniels Direction and Musical Staging by Stuart Ross Music Direction by Phil Reno