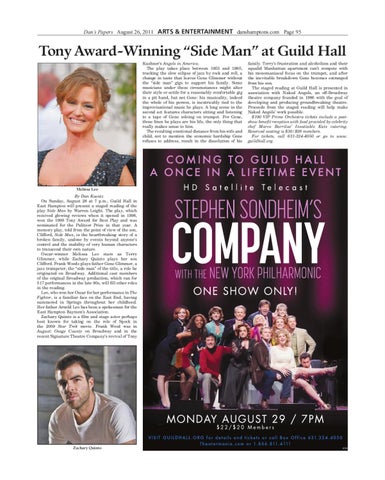 Tony Award-Winning “Side Man” at Guild Hall Kushner’s Angels in America. The play takes place between 1953 and 1985, tracking the slow eclipse of jazz by rock and roll, a change in taste that leaves Gene Glimmer without the “side man” gigs to support his family. Some musicians under these circumstances might alter their style or settle for a reasonably comfortable gig in a pit band, but not Gene: his musicality, indeed the whole of his person, is inextricably tied to the improvisational music he plays. A long scene in the second act features characters sitting and listening to a tape of Gene soloing on trumpet. For Gene, those lines he plays are his life, the only thing that really makes sense to him. The resulting emotional distance from his wife and child, not to mention the economic hardship Gene refuses to address, result in the dissolution of his

family. Terry’s frustration and alcoholism and their squalid Manhattan apartment can’t compete with his monomaniacal focus on the trumpet, and after the inevitable breakdown Gene becomes estranged from his son. The staged reading at Guild Hall is presented in association with Naked Angels, an off-Broadway theatre company founded in 1986 with the goal of developing and producing groundbreaking theatre. Proceeds from the staged reading will help make Naked Angels’ work possible. $100 VIP Prime Orchestra tickets include a postshow benefit reception with food provided by celebrity chef Marco Barrilas’ Insatiable Eats catering. Reserved seating is $30/$28 members. For tickets, call 631-324-4050 or go to www. guildhall.org.

By Dan Koontz On Sunday, August 28 at 7 p.m., Guild Hall in East Hampton will present a staged reading of the play Side Man by Warren Leight. The play, which received glowing reviews when it opened in 1998, won the 1999 Tony Award for Best Play and was nominated for the Pulitzer Prize in that year. A memory play, told from the point of view of the son, Clifford, Side Man, is the heartbreaking story of a broken family, undone by events beyond anyone’s control and the inability of very human characters to transcend their own nature. Oscar-winner Melissa Leo stars as Terry Glimmer, while Zachary Quinto plays her son Clifford. Frank Woods plays father Gene Glimmer, a jazz trumpeter, the “side man” of the title, a role he originated on Broadway. Additional cast members of the original Broadway production, which ran for 517 performances in the late 90s, will fill other roles in the reading. Leo, who won her Oscar for her performance in The Fighter, is a familiar face on the East End, having summered in Springs throughout her childhood. Her father Arnold Leo has been a spokesman for the East Hampton Baymen’s Association. Zachary Quinto is a film and stage actor perhaps best known for taking on the role of Spock in the 2009 Star Trek movie. Frank Wood was in August: Osage County on Broadway and in the recent Signature Theatre Company’s revival of Tony