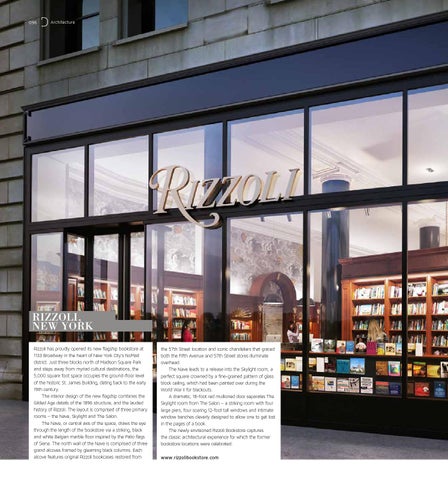 Rizzoli, New York Rizzoli has proudly opened its new flagship bookstore at 1133 Broadway in the heart of New York City’s NoMad district. Just three blocks north of Madison Square Park and steps away from myriad cultural destinations, the 5,000 square foot space occupies the ground-floor level of the historic St. James Building, dating back to the early 19th century. The interior design of the new flagship combines the Gilded Age details of the 1896 structure, and the lauded history of Rizzoli. The layout is comprised of three primary rooms – the Nave, Skylight and The Salon. The Nave, or central axis of the space, draws the eye through the length of the bookstore via a striking, black and white Belgian marble floor inspired by the Palio flags of Siena. The north wall of the Nave is comprised of three grand alcoves framed by gleaming black columns. Each alcove features original Rizzoli bookcases restored from

the 57th Street location and iconic chandeliers that graced both the Fifth Avenue and 57th Street stores illuminate overhead. The Nave leads to a release into the Skylight room, a perfect square crowned by a fine-grained pattern of glass block ceiling, which had been painted over during the World War II for blackouts. A dramatic, 18-foot red mullioned door separates The Skylight room from The Salon – a striking room with four large piers, four soaring 12-foot tall windows and intimate window benches cleverly designed to allow one to get lost in the pages of a book. The newly envisioned Rizzoli Bookstore captures the classic architectural experience for which the former bookstore locations were celebrated. www.rizzolibookstore.com