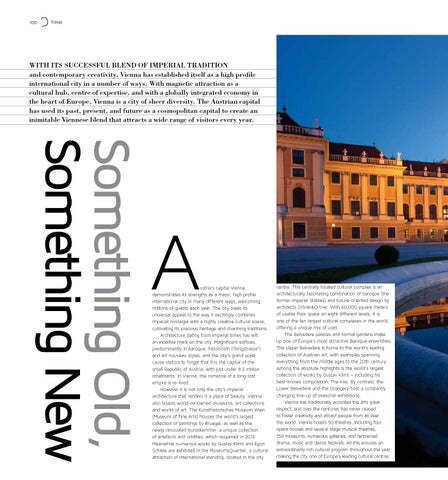 With its successful blend of imperial tradition and contemporary creativity, Vienna has established itself as a high profile international city in a number of ways. With magnetic attraction as a cultural hub, centre of expertise, and with a globally integrated economy in the heart of Europe, Vienna is a city of sheer diversity. The Austrian capital has used its past, present, and future as a cosmopolitan capital to create an inimitable Viennese blend that attracts a wide range of visitors every year.

ustria’s capital Vienna demonstrates its strengths as a major, high profile international city in many different ways, welcoming millions of guests each year. The city owes its universal appeal to the way it excitingly combines imperial nostalgia with a highly creative cultural scene, cultivating its precious heritage and charming traditions. Architecture dating from imperial times has left an indelible mark on the city. Magnificent edifices, predominantly in baroque, historicism (“Ringstrasse”) and art nouveau styles, and the city’s grand scale cause visitors to forget that it is the capital of the small Republic of Austria, with just under 8.5 million inhabitants. In Vienna, the romance of a long-lost empire is re-lived. However it is not only the city’s imperial architecture that renders it a place of beauty. Vienna also boasts world-renowned museums, art collections and works of art. The Kunsthistorisches Museum Wien (Museum of Fine Arts) houses the world’s largest collection of paintings by Bruegel, as well as the newly renovated Kunstkammer, a unique collection of artefacts and oddities, which reopened in 2013. Meanwhile numerous works by Gustav Klimt and Egon Schiele are exhibited in the MuseumsQuartier, a cultural attraction of international standing, located in the city

centre. This centrally located cultural complex is an architecturally fascinating combination of baroque (the former Imperial Stables) and future-oriented design by architects Ortner&Ortner. With 60,000 square meters of usable floor space on eight different levels, it is one of the ten largest cultural complexes in the world, offering a unique mix of uses. The Belvedere palaces and formal gardens make up one of Europe’s most attractive Baroque ensembles. The Upper Belvedere is home to the world’s leading collection of Austrian art, with examples spanning everything from the middle ages to the 20th century. Among the absolute highlights is the world’s largest collection of works by Gustav Klimt – including his best-known composition, The Kiss. By contrast, the Lower Belvedere and the Orangery host a constantly changing line-up of seasonal exhibitions. Vienna has traditionally accorded the arts great respect, and over the centuries has never ceased to foster creativity and attract people from all over the world. Vienna boasts 50 theatres, including four opera houses and several stage musical theatres, 150 museums, numerous galleries, and renowned drama, music and dance festivals. All this ensures an extraordinarily rich cultural program throughout the year, making the city one of Europe’s leading cultural centres.