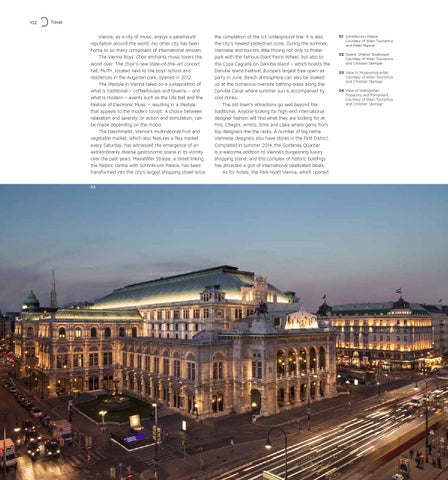 Vienna, as a city of music, enjoys a paramount reputation around the world. No other city has been home to so many composers of international renown. The Vienna Boys’ Choir enchants music lovers the world over. The choir’s new state-of-the-art concert hall, MuTh, located next to the boys’ school and residences in the Augarten park, opened in 2012. The lifestyle in Vienna takes on a juxtaposition of what is traditional – coffeehouses and taverns – and what is modern – events such as the Life Ball and the Festival of Electronic Music – resulting in a lifestyle that appeals to the modern tourist. A choice between relaxation and serenity, or action and stimulation, can be made depending on the mood. The Naschmarkt, Vienna’s multinational fruit and vegetable market, which also features a flea market every Saturday, has witnessed the emergence of an extraordinarily diverse gastronomic scene in its vicinity over the past years. Mariahilfer Strasse, a street linking the historic centre with Schönbrunn Palace, has been transformed into the city’s largest shopping street since 02

the completion of the U3 underground line. It is also the city’s newest pedestrian zone. During the summer, Viennese and tourists alike throng not only to Prater park with the famous Giant Ferris Wheel, but also to the Copa Cagrana on Danube Island – which boasts the Danube Island Festival, Europe’s largest free open-air party in June. Beach atmosphere can also be soaked up at the numerous riverside bathing areas along the Danube Canal where summer sun is accompanied by cool drinks. The old town’s attractions go well beyond the traditional. Anyone looking for high-end international designer fashion will find what they are looking for at Firis, Chegini, Amicis, Emis and Liska where gems from top designers line the racks. A number of big name Viennese designers also have stores in the First District. Completed in summer 2014, the Goldenes Quartier is a welcome addition to Vienna’s burgeoning luxury shopping scene, and this complex of historic buildings has attracted a glut of international celebrated labels. As for hotels, the Park Hyatt Vienna, which opened