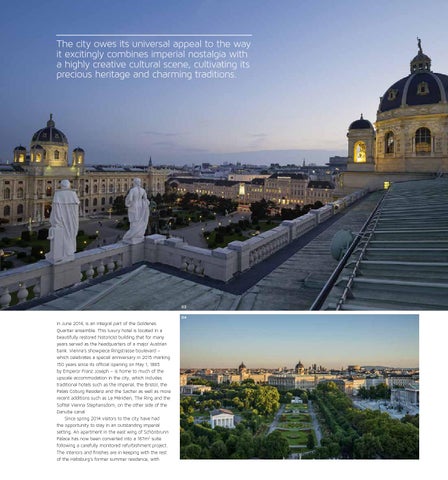 The city owes its universal appeal to the way it excitingly combines imperial nostalgia with a highly creative cultural scene, cultivating its precious heritage and charming traditions.

in June 2014, is an integral part of the Goldenes Quartier ensemble. This luxury hotel is located in a beautifully restored historicist building that for many years served as the headquarters of a major Austrian bank. Vienna’s showpiece Ringstrasse boulevard – which celebrates a special anniversary in 2015 marking 150 years since its official opening on May 1, 1865 by Emperor Franz Joseph – is home to much of the upscale accommodation in the city, which includes traditional hotels such as the Imperial, the Bristol, the Palais Coburg Residenz and the Sacher as well as more recent additions such as Le Méridien, The Ring and the Sofitel Vienna Stephansdom, on the other side of the Danube canal. Since spring 2014 visitors to the city have had the opportunity to stay in an outstanding imperial setting. An apartment in the east wing of Schönbrunn Palace has now been converted into a 167m2 suite following a carefully monitored refurbishment project. The interiors and finishes are in keeping with the rest of the Habsburg’s former summer residence, with