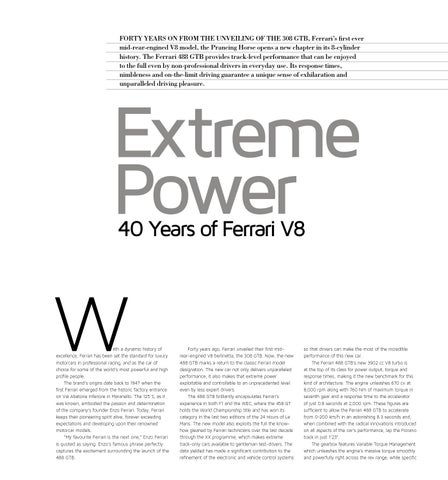 Forty years on from the unveiling of the 308 GTB, Ferrari’s first ever mid-rear-engined V8 model, the Prancing Horse opens a new chapter in its 8-cylinder history. The Ferrari 488 GTB provides track-level performance that can be enjoyed to the full even by non-professional drivers in everyday use. Its response times, nimbleness and on-the-limit driving guarantee a unique sense of exhilaration and unparalleled driving pleasure.

iith a dynamic history of excellence, Ferrari has been set the standard for luxury motorcars in professional racing, and as the car of choice for some of the world’s most powerful and high profile people. The brand’s origins date back to 1947 when the first Ferrari emerged from the historic factory entrance on Via Abetone Inferiore in Maranello. The 125 S, as it was known, embodied the passion and determination of the company’s founder Enzo Ferrari. Today, Ferrari keeps their pioneering spirit alive, forever exceeding expectations and developing upon their renowned motorcar models. “My favourite Ferrari is the next one,” Enzo Ferrari is quoted as saying. Enzo’s famous phrase perfectly captures the excitement surrounding the launch of the 488 GTB.

Forty years ago, Ferrari unveiled their first midrear-engined V8 berlinetta, the 308 GTB. Now, the new 488 GTB marks a return to the classic Ferrari model designation. The new car not only delivers unparalleled performance, it also makes that extreme power exploitable and controllable to an unprecedented level even by less expert drivers. The 488 GTB brilliantly encapsulates Ferrari’s experience in both F1 and the WEC, where the 458 GT holds the World Championship title and has won its category in the last two editions of the 24 Hours of Le Mans. The new model also exploits the full the knowhow gleaned by Ferrari technicians over the last decade through the XX programme, which makes extreme track-only cars available to gentleman test-drivers. The data yielded has made a significant contribution to the refinement of the electronic and vehicle control systems

so that drivers can make the most of the incredible performance of this new car. The Ferrari 488 GTB’s new 3902 cc V8 turbo is at the top of its class for power output, torque and response times, making it the new benchmark for this kind of architecture. The engine unleashes 670 cv at 8,000 rpm along with 760 Nm of maximum torque in seventh gear and a response time to the accelerator of just 0.8 seconds at 2,000 rpm. These figures are sufficient to allow the Ferrari 488 GTB to accelerate from 0-200 km/h in an astonishing 8.3 seconds and, when combined with the radical innovations introduced on all aspects of the car’s performance, lap the Fiorano track in just 1’23”. The gearbox features Variable Torque Management which unleashes the engine’s massive torque smoothly and powerfully right across the rev range, while specific