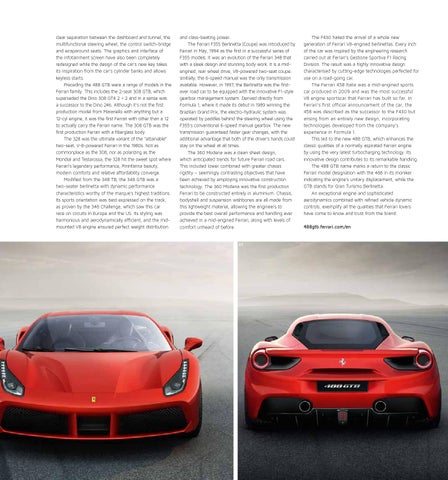 clear separation between the dashboard and tunnel, the multifunctional steering wheel, the control switch-bridge and wraparound seats. The graphics and interface of the infotainment screen have also been completely redesigned while the design of the car’s new key takes its inspiration from the car’s cylinder banks and allows keyless starts. Preceding the 488 GTB were a range of models in the Ferrari family. This includes the 2-seat 308 GTB, which superseded the Dino 308 GT4 2 + 2 and in a sense was a successor to the Dino 246. Although it’s not the first production model from Maranello with anything but a 12-cyl engine, it was the first Ferrari with other than a 12 to actually carry the Ferrari name. The 308 GTB was the first production Ferrari with a fiberglass body. The 328 was the ultimate variant of the “attainable” two-seat, V-8-powered Ferrari in the 1980s. Not as commonplace as the 308, nor as polarizing as the Mondial and Testarossa, the 328 hit the sweet spot where Ferrari’s legendary performance, Pininfarina beauty, modern comforts and relative affordability converge. Modified from the 348 TB, the 348 GTB was a two-seater berlinetta with dynamic performance characteristics worthy of the marque’s highest traditions. Its sports orientation was best expressed on the track, as proven by the 348 Challenge, which saw this car race on circuits in Europe and the US. Its styling was harmonious and aerodynamically efficient, and the midmounted V8 engine ensured perfect weight distribution

and class-beating power. The Ferrari F355 Berlinetta (Coupe) was introduced by Ferrari in May, 1994 as the first in a successful series of F355 models. It was an evolution of the Ferrari 348 that with a sleek design and stunning body work. It is a midengined, rear wheel drive, V8-powered two-seat coupe. sInitially, the 6-speed manual was the only transmission available. However, in 1997, the Berlinetta was the firstever road car to be equipped with the innovative F1-style gearbox management system. Derived directly from Formula 1, where it made its debut in 1989 winning the Brazilian Grand Prix, the electro-hydraulic system was operated by paddles behind the steering wheel using the F355’s conventional 6-speed manual gearbox. The new transmission guaranteed faster gear changes, with the additional advantage that both of the driver’s hands could stay on the wheel at all times. The 360 Modena was a clean sheet design, which anticipated trends for future Ferrari road cars. This included lower combined with greater chassis rigidity – seemingly contrasting objectives that have been achieved by employing innovative construction technology. The 360 Modena was the first production Ferrari to be constructed entirely in aluminium. Chassis, bodyshell and suspension wishbones are all made from this lightweight material, allowing the engineers to provide the best overall performance and handling ever achieved in a mid-engined Ferrari, along with levels of comfort unheard of before.

The F430 hailed the arrival of a whole new generation of Ferrari V8-engined berlinettas. Every inch of the car was inspired by the engineering research carried out at Ferrari’s Gestione Sportiva F1 Racing Division. The result was a highly innovative design characterised by cutting-edge technologies perfected for use on a road-going car. The Ferrari 458 Italia was a mid-engined sports car produced in 2009 and was the most successful V8 engine sportscar that Ferrari has built so far. In Ferrari’s first official announcement of the car, the 458 was described as the successor to the F430 but arising from an entirely new design, incorporating technologies developed from the company’s experience in Formula 1. This led to the new 488 GTB, which enhances the classic qualities of a normally aspirated Ferrari engine by using the very latest turbocharging technology. Its innovative design contributes to its remarkable handling. The 488 GTB name marks a return to the classic Ferrari model designation with the 488 in its moniker indicating the engine’s unitary displacement, while the GTB stands for Gran Turismo Berlinetta. An exceptional engine and sophisticated aerodynamics combined with refined vehicle dynamic controls, exemplify all the qualities that Ferrari lovers have come to know and trust from the brand. 488gtb.ferrari.com/en