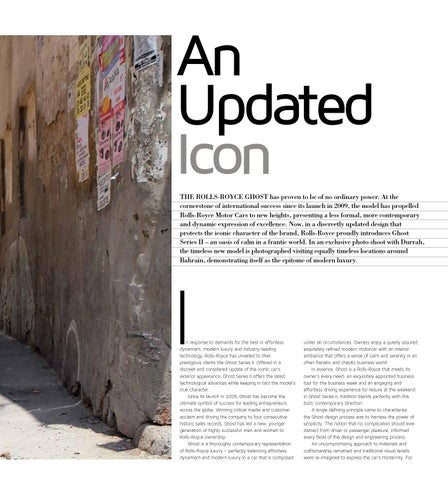 An Updated Icon The Rolls-Royce Ghost has proven to be of no ordinary power. At the cornerstone of international success since its launch in 2009, the model has propelled Rolls-Royce Motor Cars to new heights, presenting a less formal, more contemporary and dynamic expression of excellence. Now, in a discreetly updated design that protects the iconic character of the brand, Rolls-Royce proudly introduces Ghost Series II – an oasis of calm in a frantic world. In an exclusive photo shoot with Durrah, the timeless new model is photographed visiting equally timeless locations around Bahrain, demonstrating itself as the epitome of modern luxury.

n response to demands for the best in effortless dynamism, modern luxury and industry-leading technology, Rolls-Royce has unveiled to their prestigious clients the Ghost Series II. Offered in a discreet and considered update of the iconic car’s exterior appearance, Ghost Series II offers the latest technological advances while keeping in tact the model’s true character. Since its launch in 2009, Ghost has become the ultimate symbol of success for leading entrepreneurs across the globe. Winning critical media and customer acclaim and driving the company to four consecutive historic sales records, Ghost has led a new, younger generation of highly successful men and women to Rolls-Royce ownership. Ghost is a thoroughly contemporary representation of Rolls-Royce luxury – perfectly balancing effortless dynamism and modern luxury in a car that is composed

under all circumstances. Owners enjoy a quietly assured, exquisitely refined modern motorcar with an interior ambiance that offers a sense of calm and serenity in an often frenetic and chaotic business world. In essence, Ghost is a Rolls-Royce that meets its owner’s every need; an exquisitely appointed business tool for the business week and an engaging and effortless driving experience for leisure at the weekend. In Ghost Series II, tradition blends perfectly with this bold, contemporary direction. A single defining principle came to characterise the Ghost design process was to harness the power of simplicity. The notion that no complication should ever distract from driver or passenger pleasure, informed every facet of the design and engineering process. An uncompromising approach to materials and craftsmanship remained and traditional visual tenets were re-imagined to express the car’s modernity. For