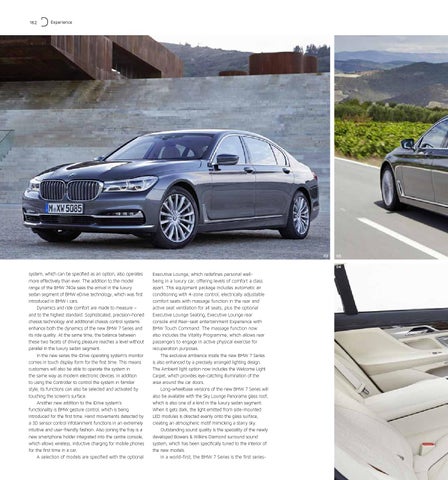 system, which can be specified as an option, also operates more effectively than ever. The addition to the model range of the BMW 740e sees the arrival in the luxury sedan segment of BMW eDrive technology, which was first introduced in BMW i cars. Dynamics and ride comfort are made to measure – and to the highest standard. Sophisticated, precision-honed chassis technology and additional chassis control systems enhance both the dynamics of the new BMW 7 Series and its ride quality. At the same time, the balance between these two facets of driving pleasure reaches a level without parallel in the luxury sedan segment. In the new series the iDrive operating system’s monitor comes in touch display form for the first time. This means customers will also be able to operate the system in the same way as modern electronic devices. In addition to using the Controller to control the system in familiar style, its functions can also be selected and activated by touching the screen’s surface. Another new addition to the iDrive system’s functionality is BMW gesture control, which is being introduced for the first time. Hand movements detected by a 3D sensor control infotainment functions in an extremely intuitive and user-friendly fashion. Also joining the fray is a new smartphone holder integrated into the centre console, which allows wireless, inductive charging for mobile phones for the first time in a car. A selection of models are specified with the optional

Executive Lounge, which redefines personal wellbeing in a luxury car, offering levels of comfort a class apart. This equipment package includes automatic air conditioning with 4-zone control, electrically adjustable comfort seats with massage function in the rear and active seat ventilation for all seats, plus the optional Executive Lounge Seating, Executive Lounge rear console and Rear-seat entertainment Experience with BMW Touch Command. The massage function now also includes the Vitality Programme, which allows rear passengers to engage in active physical exercise for recuperation purposes. The exclusive ambience inside the new BMW 7 Series is also enhanced by a precisely arranged lighting design. The Ambient light option now includes the Welcome Light Carpet, which provides eye-catching illumination of the area around the car doors. Long-wheelbase versions of the new BMW 7 Series will also be available with the Sky Lounge Panorama glass roof, which is also one of a kind in the luxury sedan segment. When it gets dark, the light emitted from side-mounted LED modules is directed evenly onto the glass surface, creating an atmospheric motif mimicking a starry sky. Outstanding sound quality is the speciality of the newly developed Bowers & Wilkins Diamond surround sound system, which has been specifically tuned to the interior of the new models. In a world-first, the BMW 7 Series is the first series-