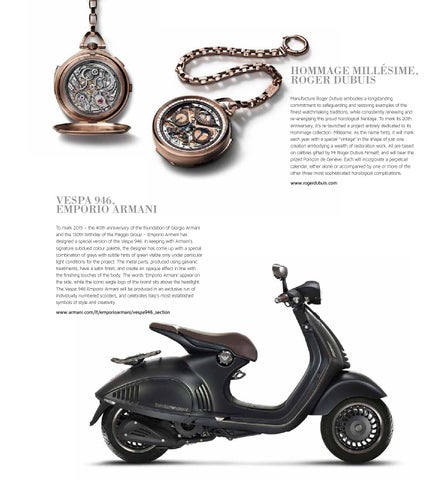 Hommage Millésime, Roger Dubuis Manufacture Roger Dubuis embodies a longstanding commitment to safeguarding and restoring examples of the finest watchmaking traditions, while consistently renewing and re-energising this proud horological heritage. To mark its 20th anniversary, it’s re-launched a project entirely dedicated to its Hommage collection: Millésime. As the name hints, it will mark each year with a special “vintage” in the shape of just one creation embodying a wealth of restoration work. All are based on calibres gifted by Mr Roger Dubuis himself, and will bear the prized Poinçon de Genève. Each will incorporate a perpetual calendar, either alone or accompanied by one or more of the other three most sophisticated horological complications. www.rogerdubuis.com

Vespa 946, Emporio Armani To mark 2015 – the 40th anniversary of the foundation of Giorgio Armani and the 130th birthday of the Piaggio Group – Emporio Armani has designed a special version of the Vespa 946. In keeping with Armani’s signature subdued colour palette, the designer has come up with a special combination of greys with subtle hints of green visible only under particular light conditions for the project. The metal parts, produced using galvanic treatments, have a satin finish, and create an opaque effect in line with the finishing touches of the body. The words ‘Emporio Armani’ appear on the side, while the iconic eagle logo of the brand sits above the headlight. The Vespa 946 Emporio Armani will be produced in an exclusive run of individually numbered scooters, and celebrates Italy’s most established symbols of style and creativity. www.armani.com/it/emporioarmani/vespa946_section