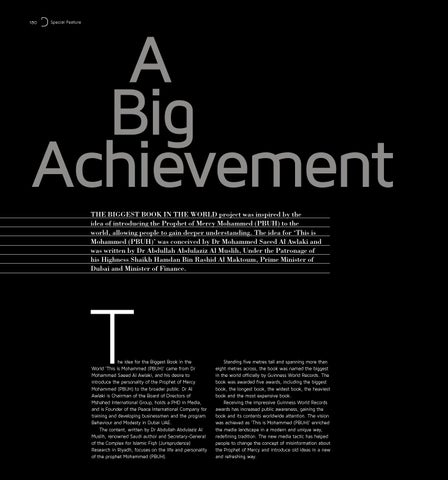 The Biggest Book in the World project was inspired by the idea of introducing the Prophet of Mercy Mohammed (PBUH) to the world, allowing people to gain deeper understanding. The idea for ‘This is Mohammed (PBUH)’ was conceived by Dr Mohammed Saeed Al Awlaki and was written by Dr Abdullah Abdulaziz Al Muslih, Under the Patronage of his Highness Shaikh Hamdan Bin Rashid Al Maktoum, Prime Minister of Dubai and Minister of Finance.

he idea for the Biggest Book in the World ‘This is Mohammed (PBUH)’ came from Dr Mohammed Saeed Al Awlaki, and his desire to introduce the personality of the Prophet of Mercy Mohammed (PBUH) to the broader public. Dr Al Awlaki is Chairman of the Board of Directors of Mshahed International Group, holds a PHD in Media, and is Founder of the Peace International Company for training and developing businessmen and the program Behaviour and Modesty in Dubai UAE. The content, written by Dr Abdullah Abdulaziz Al Muslih, renowned Saudi author and Secretary-General of the Complex for Islamic Fiqh (Jurisprudence) Research in Riyadh, focuses on the life and personality of the prophet Mohammed (PBUH).

Standing five metres tall and spanning more than eight metres across, the book was named the biggest in the world officially by Guinness World Records. The book was awarded five awards, including the biggest book, the longest book, the widest book, the heaviest book and the most expensive book. Receiving the impressive Guinness World Records awards has increased public awareness, gaining the book and its contents worldwide attention. The vision was achieved as ‘This is Mohammed (PBUH)’ enriched the media landscape in a modern and unique way, redefining tradition. The new media tactic has helped people to change the concept of misinformation about the Prophet of Mercy and introduce old ideas in a new and refreshing way.