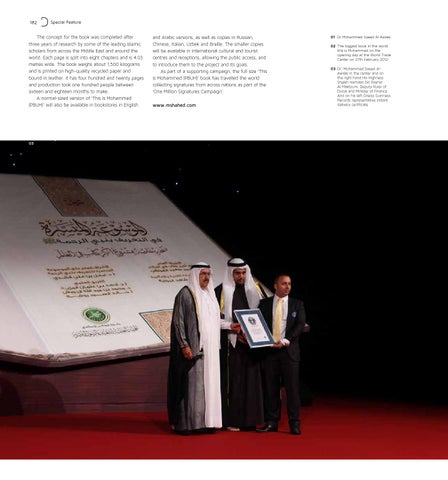 The concept for the book was completed after three years of research by some of the leading Islamic scholars from across the Middle East and around the world. Each page is split into eight chapters and is 4.03 metres wide. The book weighs about 1,500 kilograms and is printed on high-quality recycled paper and bound in leather. It has four hundred and twenty pages and production took one hundred people between sixteen and eighteen months to make. A normal-sized version of ‘This is Mohammed (PBUH)’ will also be available in bookstores in English

and Arabic versions, as well as copies in Russian, Chinese, Italian, Uzbek and Braille. The smaller copies will be available in international cultural and tourist centres and receptions, allowing the public access, and to introduce them to the project and its goals. As part of a supporting campaign, the full size ‘This is Mohammed (PBUH)’ book has travelled the world collecting signatures from across nations as part of the ‘One Million Signatures Campaign’. www.mshahed.com

01 Dr Mohammed Saeed Al Awlaki 02 The biggest book in the world this is Muhammad on the opening day at the World Trade Center on 27th February 2012 03 Dr. Mohammed Saeed alAwlaki in the center and on the right hand His Highness Sheikh Hamdan bin Rashid Al Maktoum, Deputy Ruler of Dubai and Minister of Finance And on his left Gneiss Guinness Records representative instant delivery certificate