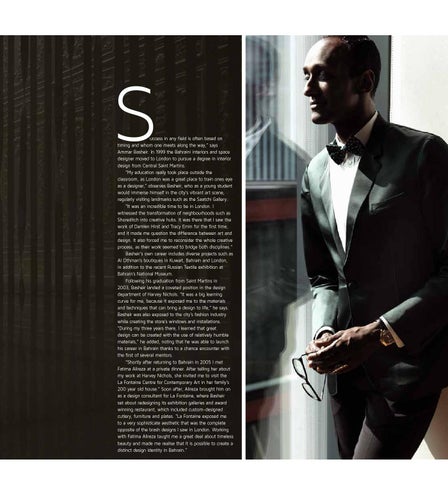 uccess in any field is often based on timing and whom one meets along the way,” says Ammar Basheir. In 1999 the Bahraini interiors and space designer moved to London to pursue a degree in interior design from Central Saint Martins. “My education really took place outside the classroom, as London was a great place to train ones eye as a designer,” observes Basheir, who as a young student would immerse himself in the city’s vibrant art scene, regularly visiting landmarks such as the Saatchi Gallery. “It was an incredible time to be in London. I witnessed the transformation of neighbourhoods such as Shoreditch into creative hubs. It was there that I saw the work of Damien Hirst and Tracy Emin for the first time, and it made me question the difference between art and design. It also forced me to reconsider the whole creative process, as their work seemed to bridge both disciplines.” Basheir’s own career includes diverse projects such as Al Othman’s boutiques in Kuwait, Bahrain and London, in addition to the recent Russian Textile exhibition at Bahrain’s National Museum. Following his graduation from Saint Martins in 2003, Basheir landed a coveted position in the design department of Harvey Nichols. “It was a big learning curve for me, because it exposed me to the materials and techniques that can bring a design to life,” he says. Basheir was also exposed to the city’s fashion industry while creating the store’s windows and installations. “During my three years there, I learned that great design can be created with the use of relatively humble materials,” he added, noting that he was able to launch his career in Bahrain thanks to a chance encounter with the first of several mentors. “Shortly after returning to Bahrain in 2005 I met Fatima Alireza at a private dinner. After telling her about my work at Harvey Nichols, she invited me to visit the La Fontaine Centre for Contemporary Art in her family’s 200 year old house.” Soon after, Alireza brought him on as a design consultant for La Fontaine, where Basheir set about redesigning its exhibition galleries and award winning restaurant, which included custom-designed cutlery, furniture and plates. “La Fontaine exposed me to a very sophisticate aesthetic that was the complete opposite of the brash designs I saw in London. Working with Fatima Alireza taught me a great deal about timeless beauty and made me realise that it is possible to create a distinct design identity in Bahrain.”