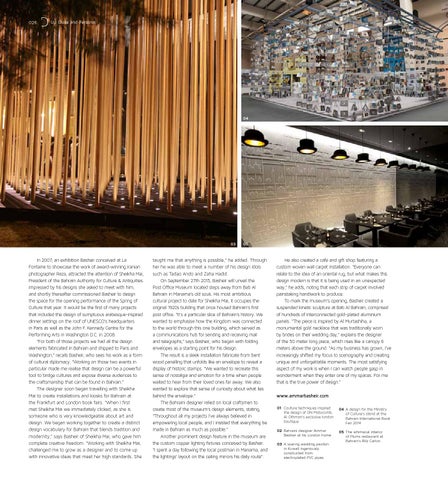 Up Close and Personal

In 2007, an exhibition Basheir conceived at La Fontaine to showcase the work of award-winning Iranian photographer Reza, attracted the attention of Sheikha Mai, President of the Bahrain Authority for Culture & Antiquities. Impressed by his designs she asked to meet with him, and shortly thereafter commissioned Basheir to design the space for the opening performance of the Spring of Culture that year. It would be the first of many projects that included the design of sumptuous arabesque-inspired dinner settings on the roof of UNESCO’s headquarters in Paris as well as the John F. Kennedy Centre for the Performing Arts in Washington D.C. in 2008. “For both of those projects we had all the design elements fabricated in Bahrain and shipped to Paris and Washington,” recalls Basheir, who sees his work as a form of cultural diplomacy. “Working on those two events in particular made me realise that design can be a powerful tool to bridge cultures and expose diverse audiences to the craftsmanship that can be found in Bahrain.” The designer soon began travelling with Sheikha Mai to create installations and kiosks for Bahrain at the Frankfurt and London book fairs. “When I first met Sheikha Mai we immediately clicked, as she is someone who is very knowledgeable about art and design. We began working together to create a distinct design vocabulary for Bahrain that blends tradition and modernity,” says Basheir of Sheikha Mai, who gave him complete creative freedom. “Working with Sheikha Mai, challenged me to grow as a designer and to come up with innovative ideas that meet her high standards. She

taught me that anything is possible,” he added. Through her he was able to meet a number of his design idols such as Tadao Ando and Zaha Hadid. On September 27th 2015, Basheir will unveil the Post Office Museum located steps away from Bab Al Bahrain in Manama’s old souk. His most ambitious cultural project to date for Sheikha Mai, it occupies the original 1920s building that once housed Bahrain’s first post office. “It’s a particular slice of Bahrain’s history. We wanted to emphasise how the Kingdom was connected to the world through this one building, which served as a communications hub for sending and receiving mail and telegraphs,” says Basheir, who began with folding envelopes as a starting point for his design. The result is a sleek installation fabricate from bent wood panelling that unfolds like an envelope to reveal a display of historic stamps. “We wanted to recreate this sense of nostalgia and emotion for a time when people waited to hear from their loved ones far away. We also wanted to explore that sense of curiosity about what lies behind the envelope.” The Bahraini designer relied on local craftsmen to create most of the museum’s design elements, stating, “Throughout all my projects I’ve always believed in empowering local people, and I insisted that everything be made in Bahrain as much as possible.” Another prominent design feature in the museum are the custom copper lighting fixtures conceived by Basheir. “I spent a day following the local postman in Manama, and the lightings’ layout on the ceiling mirrors his daily route”.

He also created a café and gift shop featuring a custom woven wall carpet installation. “Everyone can relate to the idea of an oriental rug, but what makes this design modern is that it is being used in an unexpected way,” he adds, noting that each strip of carpet involved painstaking handiwork to produce. To mark the museum’s opening, Basheir created a suspended kinetic sculpture at Bab Al Bahrain, comprised of hundreds of interconnected gold-plated aluminium panels. “The piece is inspired by Al Murtashiha, a monumental gold necklace that was traditionally worn by brides on their wedding day,” explains the designer of the 50 meter long piece, which rises like a canopy 6 meters above the ground. “As my business has grown, I’ve increasingly shifted my focus to scenography and creating unique and unforgettable moments. The most satisfying aspect of my work is when I can watch people gasp in wonderment when they enter one of my spaces. For me that is the true power of design.” www.ammarbasheir.com 01 Couture techniques inspired the design of ON Motocomb, Al Othman’s exclusive london boutique