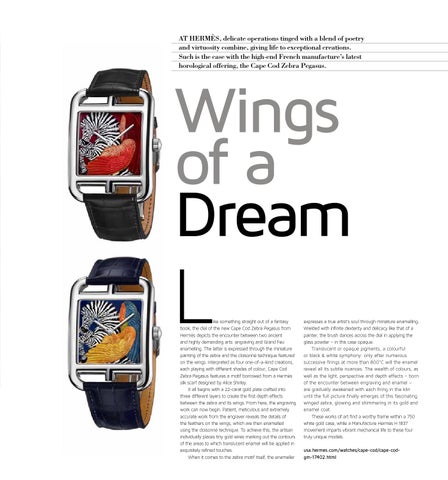 At Hermès, delicate operations tinged with a blend of poetry and virtuosity combine, giving life to exceptional creations. Such is the case with the high-end French manufacture’s latest horological offering, the Cape Cod Zebra Pegasus.

Wings of a Dream

ike something straight out of a fantasy book, the dial of the new Cape Cod Zebra Pegasus from Hermès depicts the encounter between two ancient and highly demanding arts: engraving and Grand Feu enamelling. The latter is expressed through the miniature painting of the zebra and the cloisonné technique featured on the wings. Interpreted as four one-of-a-kind creations, each playing with different shades of colour, Cape Cod Zebra Pegasus features a motif borrowed from a Hermès silk scarf designed by Alice Shirley. It all begins with a 22-carat gold plate crafted into three different layers to create the first depth effects between the zebra and its wings. From here, the engraving work can now begin. Patient, meticulous and extremely accurate work from the engraver reveals the details of the feathers on the wings, which are then enamelled using the cloisonné technique. To achieve this, the artisan individually places tiny gold wires marking out the contours of the areas to which translucent enamel will be applied in exquisitely refined touches. When it comes to the zebra motif itself, the enameller

expresses a true artist’s soul through miniature enamelling. Wielded with infinite dexterity and delicacy like that of a painter, the brush dances across the dial in applying the glass powder – in this case opaque. Translucent or opaque pigments, a colourful or black & white symphony: only after numerous successive firings at more than 800°C will the enamel reveal all its subtle nuances. The wealth of colours, as well as the light, perspective and depth effects – born of the encounter between engraving and enamel – are gradually awakened with each firing in the kiln until the full picture finally emerges of this fascinating winged zebra, glowing and shimmering in its gold and enamel coat. These works of art find a worthy frame within a 750 white gold case, while a Manufacture Hermès H 1837 movement imparts vibrant mechanical life to these four truly unique models. usa.hermes.com/watches/cape-cod/cape-codgm-17402.html