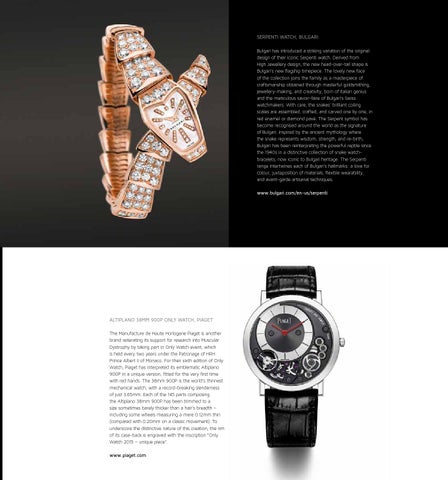 Serpenti Watch, Bulgari Bulgari has introduced a striking variation of the original design of their iconic Serpenti watch. Derived from High Jewellery design, the new head-over-tail shape is Bulgari’s new flagship timepiece. The lovely new face of the collection joins the family as a masterpiece of craftsmanship obtained through masterful goldsmithing, jewellery-making, and creativity, born of Italian genius and the meticulous savoir-faire of Bulgari’s Swiss watchmakers. With care, the snakes’ brilliant coiling scales are assembled, crafted, and carved one by one, in red enamel or diamond pavé. The Serpent symbol has become recognised around the world as the signature of Bulgari. Inspired by the ancient mythology where the snake represents wisdom, strength, and re-birth, Bulgari has been reinterpreting the powerful reptile since the 1940s in a distinctive collection of snake watchbracelets, now iconic to Bulgari heritage. The Serpenti range intertwines each of Bulgari’s hallmarks: a love for colour, juxtaposition of materials, flexible wearability, and avant-garde artisanal techniques. www.bulgari.com/en-us/serpenti

Altiplano 38mm 900P Only Watch, Piaget The Manufacture de Haute Horlogerie Piaget is another brand reiterating its support for research into Muscular Dystrophy by taking part in Only Watch event, which is held every two years under the Patronage of HRH Prince Albert II of Monaco. For their sixth edition of Only Watch, Piaget has interpreted its emblematic Altiplano 900P in a unique version, fitted for the very first time with red hands. The 38mm 900P is the world’s thinnest mechanical watch, with a record-breaking slenderness of just 3.65mm. Each of the 145 parts composing the Altiplano 38mm 900P has been trimmed to a size sometimes barely thicker than a hair’s breadth – including some wheels measuring a mere 0.12mm thin (compared with 0.20mm on a classic movement). To underscore the distinctive nature of this creation, the rim of its case-back is engraved with the inscription “Only Watch 2015 – unique piece”. www.piaget.com