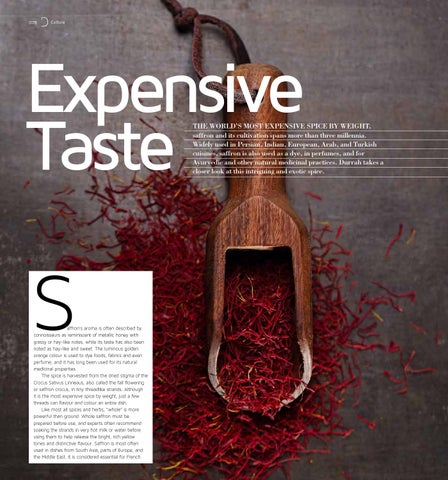 The world’s most expensive spice by weight, saffron and its cultivation spans more than three millennia. Widely used in Persian, Indian, European, Arab, and Turkish cuisines, saffron is also used as a dye, in perfumes, and for Ayurvedic and other natural medicinal practices. Durrah takes a closer look at this intriguing and exotic spice.

affron’s aroma is often described by connoisseurs as reminiscent of metallic honey with grassy or hay-like notes, while its taste has also been noted as hay-like and sweet. The luminous golden orange colour is used to dye foods, fabrics and even perfume, and it has long been used for its natural medicinal properties. The spice is harvested from the dried stigma of the Crocus Sativus Linneaus, also called the fall flowering or saffron crocus, in tiny threadlike strands. Although it is the most expensive spice by weight, just a few threads can flavour and colour an entire dish. Like most all spices and herbs, “whole” is more powerful than ground. Whole saffron must be prepared before use, and experts often recommend soaking the strands in very hot milk or water before using them to help release the bright, rich yellow tones and distinctive flavour. Saffron is most often used in dishes from South Asia, parts of Europe, and the Middle East. It is considered essential for French