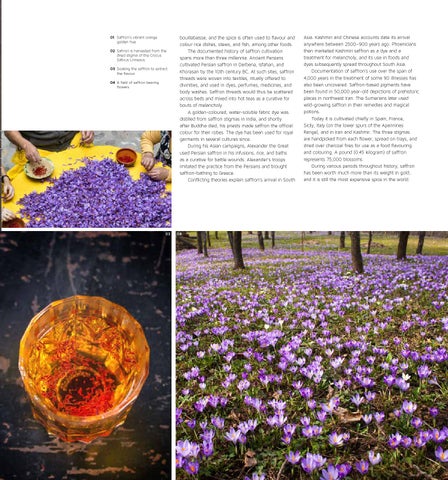 bouillabaisse, and the spice is often used to flavour and colour rice dishes, stews, and fish, among other foods. The documented history of saffron cultivation spans more than three millennia. Ancient Persians cultivated Persian saffron in Derbena, Isfahan, and Khorasan by the 10th century BC. At such sites, saffron threads were woven into textiles, ritually offered to divinities, and used in dyes, perfumes, medicines, and body washes. Saffron threads would thus be scattered across beds and mixed into hot teas as a curative for bouts of melancholy. A golden-coloured, water-soluble fabric dye was distilled from saffron stigmas in India, and shortly after Buddha died, his priests made saffron the official colour for their robes. The dye has been used for royal garments in several cultures since. During his Asian campaigns, Alexander the Great used Persian saffron in his infusions, rice, and baths as a curative for battle wounds. Alexander’s troops imitated the practice from the Persians and brought saffron-bathing to Greece. Conflicting theories explain saffron’s arrival in South

Asia. Kashmiri and Chinese accounts date its arrival anywhere between 2500–900 years ago. Phoenicians then marketed Kashmiri saffron as a dye and a treatment for melancholy, and its use in foods and dyes subsequently spread throughout South Asia. Documentation of saffron’s use over the span of 4,000 years in the treatment of some 90 illnesses has also been uncovered. Saffron-based pigments have been found in 50,000 year-old depictions of prehistoric places in northwest Iran. The Sumerians later used wild-growing saffron in their remedies and magical potions. Today it is cultivated chiefly in Spain, France, Sicily, Italy (on the lower spurs of the Apennines Range), and in Iran and Kashmir. The three stigmas are handpicked from each flower, spread on trays, and dried over charcoal fires for use as a food flavouring and colouring. A pound (0.45 kilogram) of saffron represents 75,000 blossoms. During various periods throughout history, saffron has been worth much more than its weight in gold; and it is still the most expensive spice in the world.