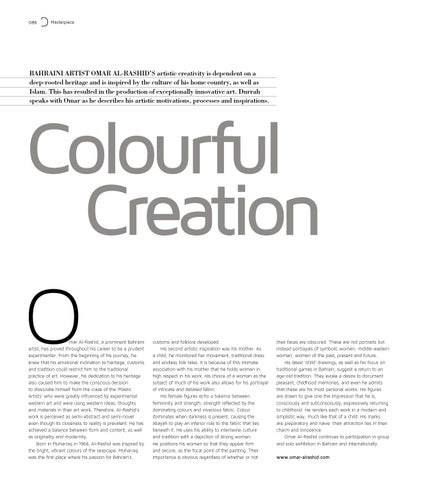 Bahraini artist Omar Al-Rashid’s artistic creativity is dependent on a deep-rooted heritage and is inspired by the culture of his home country, as well as Islam. This has resulted in the production of exceptionally innovative art. Durrah speaks with Omar as he describes his artistic motivations, processes and inspirations.

mar Al-Rashid, a prominent Bahraini artist, has proved throughout his career to be a prudent experimenter. From the beginning of his journey, he knew that his emotional inclination to heritage, customs and tradition could restrict him to the traditional practice of art. However, his dedication to his heritage also caused him to make the conscious decision to dissociate himself from the craze of the ‘Plastic Artists’ who were greatly influenced by experimental western art and were using western ideas, thoughts and materials in their art work. Therefore, Al-Rashid’s work is perceived as semi-abstract and semi-novel even though its closeness to reality is prevalent. He has achieved a balance between form and content, as well as originality and modernity. Born in Muharraq in 1966, AI-Rashid was inspired by the bright, vibrant colours of the seascape. Muharraq was the first place where his passion for Bahrain’s

customs and folklore developed. His second artistic inspiration was his mother. As a child, he monitored her movement, traditional dress and endless folk tales. It is because of this intimate association with his mother that he holds women in high respect in his work. His choice of a woman as the subject of much of his work also allows for his portrayal of intricate and detailed fabric. His female figures echo a balance between femininity and strength; strength reflected by the dominating colours and vivacious fabric. Colour dominates when darkness is present, causing the abayah to play an inferior role to the fabric that lies beneath it. He uses his ability to intertwine culture and tradition with a depiction of strong women. He positions his women so that they appear firm and secure, as the focal point of the painting. Their importance is obvious regardless of whether or not

their faces are obscured. These are not portraits but instead portrayals of symbolic women; middle-eastern women; women of the past, present and future. His latest ‘child’ drawings, as well as his focus on traditional games in Bahrain, suggest a return to an age-old tradition. They evoke a desire to document pleasant, childhood memories, and even he admits that these are his most personal works. His figures are drawn to give one the impression that he is, consciously and subconsciously, expressively returning to childhood. He renders each work in a modern and simplistic way, much like that of a child. His marks are preparatory and naive: their attraction lies in their charm and innocence. Omar AI-Rashid continues to participation in group and solo exhibition in Bahrain and internationally. www.omar-alrashid.com