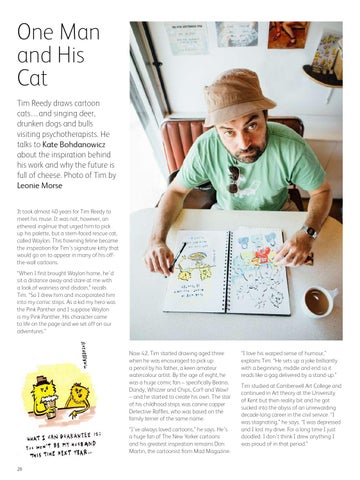 One Man and His Cat Tim Reedy draws cartoon cats…and singing deer, drunken dogs and bulls visiting psychotherapists. He talks to Kate Bohdanowicz about the inspiration behind his work and why the future is full of cheese. Photo of Tim by Leonie Morse It took almost 40 years for Tim Reedy to meet his muse. It was not, however, an ethereal ingénue that urged him to pick up his palette, but a stern-faced rescue cat, called Waylon. This frowning feline became the inspiration for Tim’s signature kitty that would go on to appear in many of his offthe-wall cartoons. “When I first brought Waylon home, he’d sit a distance away and stare at me with a look of wariness and disdain,” recalls Tim. “So I drew him and incorporated him into my comic strips. As a kid my hero was the Pink Panther and I suppose Waylon is my Pink Panther. His character came to life on the page and we set off on our adventures.”

Now 42, Tim started drawing aged three when he was encouraged to pick up a pencil by his father, a keen amateur watercolour artist. By the age of eight, he was a huge comic fan – specifically Beano, Dandy, Whizzer and Chips, Cor!! and Wow! – and he started to create his own. The star of his childhood strips was canine copper Detective Raffles, who was based on the family terrier of the same name. “I’ve always loved cartoons,” he says. He’s a huge fan of The New Yorker cartoons and his greatest inspiration remains Don Martin, the cartoonist from Mad Magazine. 20

“I love his warped sense of humour,” explains Tim. “He sets up a joke brilliantly with a beginning, middle and end so it reads like a gag delivered by a stand-up.” Tim studied at Camberwell Art College and continued in Art theory at the University of Kent but then reality bit and he got sucked into the abyss of an unrewarding decade-long career in the civil service. “I was stagnating,” he says. “I was depressed and I lost my drive. For a long time I just doodled. I don’t think I drew anything I was proud of in that period.” A guide to this month's cultural life of Walthamstow, North East London, including a listing section for local events. Featuring: cover arti...

A guide to this month's cultural life of Walthamstow, North East London, including a listing section for local events. Featuring: cover arti...