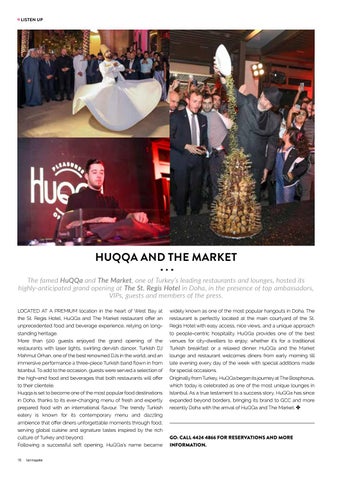 HUQQA AND THE MARKET The famed HuQQa and The Market, one of Turkey’s leading restaurants and lounges, hosted its highly-anticipated grand opening at The St. Regis Hotel in Doha, in the presence of top ambassadors, VIPs, guests and members of the press. LOCATED AT A PREMIUM location in the heart of West Bay at the St. Regis Hotel, HuQQa and The Market restaurant offer an unprecedented food and beverage experience, relying on longstanding heritage. More than 500 guests enjoyed the grand opening of the restaurants with laser lights, swirling dervish dancer, Turkish DJ Mahmut Orhan, one of the best renowned DJs in the world, and an immersive performance a three-piece Turkish band flown in from Istanbul. To add to the occasion, guests were served a selection of the high-end food and beverages that both restaurants will offer to their clientele. Huqqa is set to become one of the most popular food destinations in Doha, thanks to its ever-changing menu of fresh and expertly prepared food with an international flavour. The trendy Turkish eatery is known for its contemporary menu and dazzling ambience that offer diners unforgettable moments through food, serving global cuisine and signature tastes inspired by the rich culture of Turkey and beyond. Following a successful soft opening, HuQQa’s name became 18

widely known as one of the most popular hangouts in Doha. The restaurant is perfectly located at the main courtyard of the St. Regis Hotel with easy access, nice views, and a unique approach to people-centric hospitality. HuQQa provides one of the best venues for city-dwellers to enjoy; whether it’s for a traditional Turkish breakfast or a relaxed dinner. HuQQa and the Market lounge and restaurant welcomes diners from early morning till late evening every day of the week with special additions made for special occasions. Originally from Turkey, HuQQa began its journey at The Bosphorus, which today is celebrated as one of the most unique lounges in Istanbul. As a true testament to a success story, HuQQa has since expanded beyond borders, bringing its brand to GCC and more recently Doha with the arrival of HuQQa and The Market. ✤