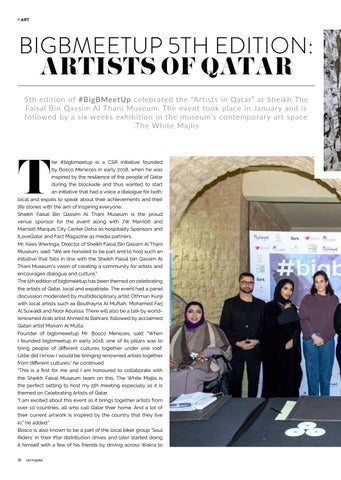 5th edition of #BigBMeetUp celebrated the “Artists in Qatar” at Sheikh The Faisal Bin Qassim Al Thani Museum. The event took place in January and is followed by a six weeks exhibition in the museum’s contemporary art space .The White Majlis

he #bigbmeetup is a CSR initiative founded by Bosco Menezes in early 2018, when he was inspired by the resilience of the people of Qatar during the blockade and thus wanted to start an initiative that had a voice a dialogue for both; local and expats to speak about their achievements and their life stories with the aim of inspiring everyone. Sheikh Faisal Bin Qassim Al Thani Museum is the proud venue sponsor for the event along with JW Marriott and Marriott Marquis City Center Doha as hospitality Sponsors and ILoveQatar and Fact Magazine as media partners. Mr. Kees Wieringa, Director of Sheikh Faisal Bin Qassim Al Thani Museum, said: “We are honored to be part and to host such an initiative that falls in line with the Sheikh Faisal bin Qassim Al Thani Museum’s vision of creating a community for artists and encourages dialogue and culture.” The 5th edition of bigbmeetup has been themed on celebrating the artists of Qatar, local and expatriate. The event had a panel discussion moderated by multidisciplinary artist Othman Kunji with local artists such as Bouthayna Al Muftah, Mohamed Farj Al Suwaidi and Noor Abuissa. There will also be a talk by worldrenowned Arab artist Ahmed Al Bahrani, followed by acclaimed Qatari artist Mariam Al Mulla. Founder of bigbmeeetup Mr. Bosco Menezes, said: “When I founded bigbmeetup in early 2018, one of its pillars was to bring people of different cultures together under one roof. Little did I know I would be bringing renowned artists together from different cultures,” he continued. “This is a first for me and I am honoured to collaborate with the Sheikh Faisal Museum team on this. The White Majlis is the perfect setting to host my 5th meeting especially as it is themed on Celebrating Artists of Qatar. “I am excited about this event as it brings together artists from over 10 countries, all who call Qatar their home. And a lot of their current artwork is inspired by the country that they live in,” he added.” Bosco is also known to be a part of the local biker group ‘Soul Riders’ in their Iftar distribution drives and later started doing it himself with a few of his friends by driving across Wakra to 38