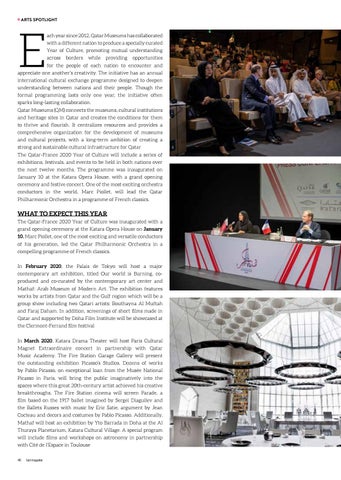 ach year since 2012, Qatar Museums has collaborated with a different nation to produce a specially curated Year of Culture, promoting mutual understanding across borders while providing opportunities for the people of each nation to encounter and appreciate one another’s creativity. The initiative has an annual international cultural exchange programme designed to deepen understanding between nations and their people. Though the formal programming lasts only one year, the initiative often sparks long-lasting collaboration. Qatar Museums (QM) connects the museums, cultural institutions and heritage sites in Qatar and creates the conditions for them to thrive and flourish. It centralizes resources and provides a comprehensive organization for the development of museums and cultural projects, with a long-term ambition of creating a strong and sustainable cultural infrastructure for Qatar The Qatar-France 2020 Year of Culture will include a series of exhibitions, festivals, and events to be held in both nations over the next twelve months. The programme was inaugurated on January 10 at the Katara Opera House, with a grand opening ceremony and festive concert. One of the most exciting orchestra conductors in the world, Marc Piollet, will lead the Qatar Philharmonic Orchestra in a programme of French classics.

WHAT TO EXPECT THIS YEAR The Qatar-France 2020 Year of Culture was inaugurated with a grand opening ceremony at the Katara Opera House on January 10. Marc Piollet, one of the most exciting and versatile conductors of his generation, led the Qatar Philharmonic Orchestra in a compelling programme of French classics. In February 2020, the Palais de Tokyo will host a major contemporary art exhibition, titled Our world is Burning, coproduced and co-curated by the contemporary art center and Mathaf: Arab Museum of Modern Art. The exhibition features works by artists from Qatar and the Gulf region which will be a group show including two Qatari artists: Bouthayna Al Muftah and Faraj Daham. In addition, screenings of short films made in Qatar and supported by Doha Film Institute will be showcased at the Clermont-Ferrand film festival In March 2020, Katara Drama Theater will host Paris Cultural Magnet Extraordinaire concert in partnership with Qatar Music Academy. The Fire Station Garage Gallery will present the outstanding exhibition Picasso’s Studios. Dozens of works by Pablo Picasso, on exceptional loan from the Musée National Picasso in Paris, will bring the public imaginatively into the spaces where this great 20th-century artist achieved his creative breakthroughs. The Fire Station cinema will screen Parade, a film based on the 1917 ballet imagined by Sergei Diaguilev and the Ballets Russes with music by Eric Satie, argument by Jean Cocteau and decors and costumes by Pablo Picasso. Additionally, Mathaf will host an exhibition by Yto Barrada in Doha at the Al Thuraya Planetarium, Katara Cultural Village. A special program will include films and workshops on astronomy in partnership with Cité de l’Espace in Toulouse 46