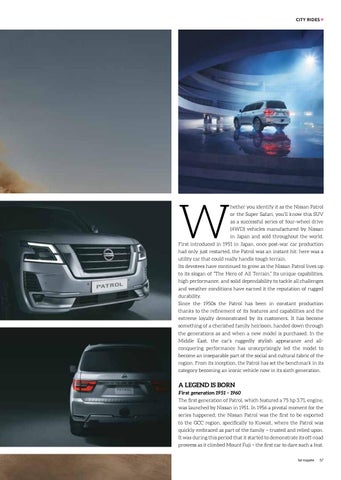 hether you identify it as the Nissan Patrol or the Super Safari, you’ll know this SUV as a successful series of four-wheel drive (4WD) vehicles manufactured by Nissan in Japan and sold throughout the world. First introduced in 1951 in Japan, once post-war car production had only just restarted, the Patrol was an instant hit: here was a utility car that could really handle tough terrain. Its devotees have continued to grow as the Nissan Patrol lives up to its slogan of “The Hero of All Terrain.” Its unique capabilities, high performance, and solid dependability to tackle all challenges and weather conditions have earned it the reputation of rugged durability. Since the 1950s the Patrol has been in constant production thanks to the refinement of its features and capabilities and the extreme loyalty demonstrated by its customers. It has become something of a cherished family heirloom, handed down through the generations as and when a new model is purchased. In the Middle East, the car’s ruggedly stylish appearance and allconquering performance has unsurprisingly led the model to become an inseparable part of the social and cultural fabric of the region. From its inception, the Patrol has set the benchmark in its category becoming an iconic vehicle now in its sixth generation.

A LEGEND IS BORN First generation 1951 – 1960 The first generation of Patrol, which featured a 75 hp 3.7L engine, was launched by Nissan in 1951. In 1956 a pivotal moment for the series happened; the Nissan Patrol was the first to be exported to the GCC region, specifically to Kuwait, where the Patrol was quickly embraced as part of the family – trusted and relied upon. It was during this period that it started to demonstrate its off-road prowess as it climbed Mount Fuji – the first car to dare such a feat. fact magazine