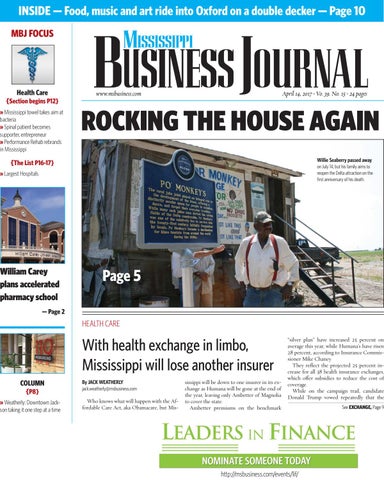 INSIDE — Food, music and art ride into Oxford on a double decker — Page 10 MBJ FOCUS

on July 14, but his family aims to reopen the Delta attraction on the ﬁrst anniversary of his death.

With health exchange in limbo, Mississippi will lose another insurer COLUMN {P8}

» Weatherly: Downtown Jackson taking it one step at a time

By JACK WEATHERLY jack.weatherly@msbusiness.com Who knows what will happen with the Affordable Care Act, aka Obamacare, but Mis-

sissippi will be down to one insurer in its exchange as Humana will be gone at the end of the year, leaving only Ambetter of Magnolia to cover the state. Ambetter premiums on the benchmark

“silver plan” have increased 25 percent on average this year, while Humana’s have risen 28 percent, according to Insurance Commissioner Mike Chaney They reﬂect the projected 25 percent increase for all 38 health insurance exchanges, which offer subsidies to reduce the cost of coverage. While on the campaign trail, candidate Donald Trump vowed repeatedly that the