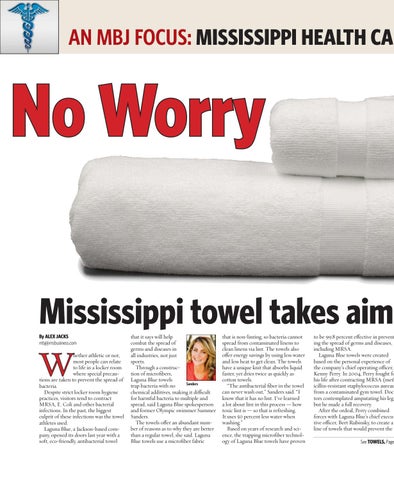 hether athletic or not, most people can relate to life in a locker room where special precautions are taken to prevent the spread of bacteria. Despite strict locker room hygiene practices, visitors tend to contract MRSA, E. Coli and other bacterial infections. In the past, the biggest culprit of these infections was the towel athletes used. Laguna Blue, a Jackson-based company, opened its doors last year with a soft, eco-friendly, antibacterial towel

that it says will help combat the spread of germs and diseases in all industries, not just sports. Through a construction of microﬁbers, Laguna Blue towels Sanders trap bacteria with no chemical additives, making it difficult for harmful bacteria to multiple and spread, said Laguna Blue spokesperson and former Olympic swimmer Summer Sanders. The towels offer an abundant number of reasons as to why they are better than a regular towel, she said. Laguna Blue towels use a microﬁber fabric

that is non-linting, so bacteria cannot spread from contaminated linens to clean linens via lint. The towels also offer energy savings by using less water and less heat to get clean. The towels have a unique knit that absorbs liquid faster, yet dries twice as quickly as cotton towels. “The antibacterial ﬁber in the towel can never wash out,” Sanders said. “I know that it has no lint. I’ve learned a lot about lint in this process — how toxic lint is — so that is refreshing. It uses 50 percent less water when washing.” Based on years of research and science, the trapping microﬁber technology of Laguna Blue towels have proven

to be 99.8 percent effective in prevent ing the spread of germs and diseases, including MRSA. Laguna Blue towels were created based on the personal experience of the company’s chief operating officer, Kenny Perry. In 2004, Perry fought fo his life after contracting MRSA (meth icillin-resistant staphylococcus aureau from a contaminated gym towel. Doctors contemplated amputating his leg, but he made a full recovery. After the ordeal, Perry combined forces with Laguna Blue’s chief executive officer, Bert Rubinsky, to create a line of towels that would prevent the