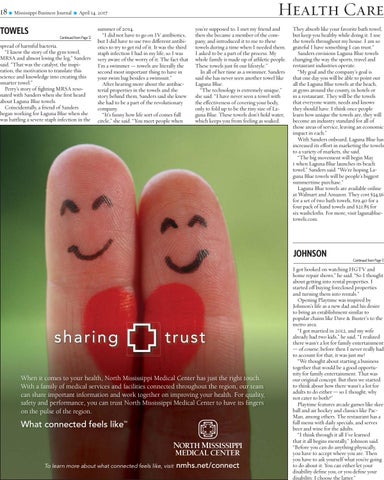 spread of harmful bacteria. “I know the story of the gym towel, MRSA and almost losing the leg,” Sanders said. “That was the catalyst, the inspiration, the motivation to translate this science and knowledge into creating this smarter towel.” Perry’s story of ﬁghting MRSA resonated with Sanders when she ﬁrst heard about Laguna Blue towels. Coincidentally, a friend of Sanders began working for Laguna Blue when she was battling a severe staph infection in the

summer of 2014. “I did not have to go on IV antibiotics, but I did have to use two different antibiotics to try to get rid of it. It was the third staph infection I had in my life, so I was very aware of the worry of it. The fact that I’m a swimmer — towels are literally the second most important thing to have in your swim bag besides a swimsuit.” After hearing more about the antibacterial properties in the towels and the story behind them, Sanders said she knew she had to be a part of the revolutionary company. “It’s funny how life sort of comes full circle,” she said. “You meet people when

you’re supposed to. I met my friend and then she became a member of the company, and introduced it to me to these towels during a time when I needed them. I asked to be a part of the process. My whole family is made up of athletic people. These towels just ﬁt our lifestyle.” In all of her time as a swimmer, Sanders said she has never seen another towel like Laguna Blue. “The technology is extremely unique,” she said. “I have never seen a towel with the effectiveness of covering your body, only to fold up to be the tiny size of Laguna Blue. These towels don’t hold water, which keeps you from feeling as soaked.

They absorb like your favorite bath towel, but keep you healthy while doing it. I use the towels throughout my house. I am so grateful I have something I can trust.” Sanders envisions Laguna Blue towels changing the way the sports, travel and restaurant industries operate. “My goal and the company’s goal is that one day you will be able to point out all the Laguna Blue towels at the beach, at gyms around the county, in hotels or in a restaurant. They will be the towels that everyone wants, needs and knows they should have. I think once people learn how unique the towels are, they will become an industry standard for all of those areas of service, leaving an economic impact in each.” With Sanders onboard, Laguna Blue has increased its effort in marketing the towels to a variety of markets, she said. “The big movement will begin May 1 when Laguna Blue launches its beach towel,” Sanders said. “We’re hoping Laguna Blue towels will be people’s biggest summertime purchase.” Laguna Blue towels are available online at Walmart and Amazon. They cost $34.56 for a set of two bath towels, $19.40 for a four pack of hand towels and $21.85 for six washcloths. For more, visit lagunabluetowels.com.

When it comes to your health, North Mississippi Medical Center has just the right touch. With a family of medical services and facilities connected throughout the region, our team can share important information and work together on improving your health. For quality, safety and performance, you can trust North Mississippi Medical Center to have its ﬁngers on the pulse of the region.

To learn more about what connected feels like, visit

I got hooked on watching HGTV and home repair shows,” he said. “So I thought about getting into rental properties. I started off buying foreclosed properties and turning them into rentals.” Opening Playtime was inspired by Johnson’s life as a new dad and his desire to bring an establishment similar to popular chains like Dave & Buster’s to the metro area. “I got married in 2012, and my wife already had two kids,” he said. “I realized there wasn’t a lot for family entertainment — of course, before then I never really had to account for that, it was just me! “We thought about starting a business together that would be a good opportunity for family entertainment. That was our original concept. But then we started to think about how there wasn’t a lot for adults to do either — so I thought, why not cater to both?” Playtime features arcade games like skee ball and air hockey and classics like PacMan, among others. The restaurant has a full menu with daily specials, and serves beer and wine for the adults. “I think through it all I’ve learned that it all begins mentally,” Johnson said. “Before you can do anything physically, you have to accept where you are. Then you have to ask yourself what you’re going to do about it. You can either let your disability deﬁne you, or you deﬁne your disability. I choose the latter.”