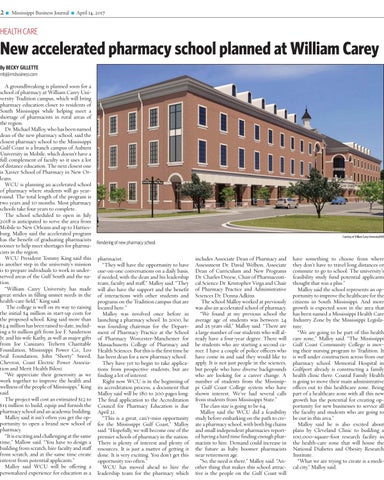 A groundbreaking is planned soon for a school of pharmacy at William Carey University Tradition campus, which will bring pharmacy education closer to residents of South Mississippi while helping meet a shortage of pharmacists in rural areas of the region. Dr. Michael Malloy, who has been named dean of the new pharmacy school, said the closest pharmacy school to the Mississippi Gulf Coast is a branch campus of Auburn University in Mobile, which doesn’t have a full complement of faculty so it uses a lot of distance education. The next closest one is Xavier School of Pharmacy in New Orleans. WCU is planning an accelerated school of pharmacy where students will go yearround. The total length of the program is two years and 10 months. Most pharmacy schools take four years to complete. The school scheduled to open in July 2018 is anticipated to serve the area from Mobile to New Orleans and up to Hattiesburg. Malloy said the accelerated program has the beneﬁt of graduating pharmacists Rendering of new pharmacy school. sooner to help meet shortages for pharmacists in the region. WCU President Tommy King said this pharmacist. is another step in the university’s mission “They will have the opportunity to have is to prepare individuals to work in under- one-on-one conversations on a daily basis, served areas of the Gulf South and the na- if needed, with the dean and his leadership tion. team, faculty and staff,” Malloy said. “They “William Carey University has made will also have the support and the beneﬁt great strides in ﬁlling unmet needs in the of interactions with other students and health-care ﬁeld,” King said. programs on the Tradition campus that are The college is well on its way to raising located here.” the initial $4 million in start-up costs for Malloy was involved once before in the proposed school. King said more than launching a pharmacy school. In 2000, he $3.4 million has been raised to date, includ- was founding chairman for the Departing a $1 million gift from Joe F. Sanderson ment of Pharmacy Practice at the School Jr. and his wife Kathy, as well as major gifts of Pharmacy Worcester-Manchester for from Joe Canizaro, Trehern Charitable Massachusetts College of Pharmacy and Foundation, Mississippi Power Co., Leo Health Sciences. But this is the ﬁrst time he Seal Foundation, John “Shorty” Sneed, has been dean for a new pharmacy school. Chevron, Coast Electric Power AssociaThey have yet to begin to take application and Merit Health Biloxi. tions from prospective students, but are “We appreciate their generosity as we ﬁnding a lot of interest. work together to improve the health and Right now WCU is in the beginning of wellness of the people of Mississippi,” King its accreditation process, a document that said. Malloy said will be 180 to 200 pages long. The project will cost an estimated $12 to The ﬁnal application to the Accreditation $15 million to build, equip and furnish the Council for Pharmacy Education is due pharmacy school and an academic building. April 21. Malloy said it isn’t often you get the op“This is a great, can’t-miss opportunity portunity to open a brand new school of for the Mississippi Gulf Coast,” Malloy pharmacy. said. “Hopefully, we will become one of the “It is exciting and challenging at the same premier schools of pharmacy in the nation. time,” Mallow said. “You have to design a There is plenty of interest and plenty of building from scratch, hire faculty and staff resources. It is just a matter of getting it from scratch, and at the same time create done. It is very exciting. You don’t get this interest from potential applicants.” opportunity too often.” Malloy said WCU will be offering a WCU has moved ahead to hire the personalized experience for education as a leadership team for the pharmacy which

includes Associate Dean of Pharmacy and Assessment Dr. David Welbon, Associate Dean of Curriculum and New Programs Dr. Charles Dreese, Chair of Pharmaceutical Science Dr. Kristopher Virga and Chair of Pharmacy Practice and Administrative Sciences Dr. Donna Adkins. The school Malloy worked at previously was also an accelerated school of pharmacy. “We found at my previous school the average age of students was between 24 and 25 years old,” Malloy said. “There are a large number of our students who will already have a four-year degree. There will be students who are starting a second career. I have a couple of police officers who have come in and said they would like to apply. It is not just people in the sciences, but people who have diverse backgrounds who are looking for a career change. A number of students from the Mississippi Gulf Coast College system who have shown interest. We’ve had several calls from students from Mississippi State.” The class size is going to be 64. Malloy said the WCU did a feasibility study before embarking on the path to create a pharmacy school, with both big chains and small independent pharmacies reported having a hard time ﬁnding enough pharmacists to hire. Demand could increase in the future as baby boomer pharmacists near retirement age. “So, the need is there,” Malloy said. “Another thing that makes this school attractive is the people on the Gulf Coast will

have something to choose from where they don’t have to travel long distances or commute to go to school. The university’s feasibility study fund potential applicants thought that was a plus.” Malloy said the school represents an opportunity to improve the healthcare for the citizens in South Mississippi. And more growth is expected soon in the area that has been named a Mississippi Health Care Industry Zone by the Mississippi Legislature. “We are going to be part of this health care zone,” Malloy said. “The Mississippi Gulf Coast Community College is moving their nursing program to Tradition. It is well under construction across from our pharmacy school. Memorial Hospital in Gulfport already is constructing a family health clinic there. Coastal Family Health is going to move their main administrative offices out to this healthcare zone. Being part of a healthcare zone with all this new growth has the potential for creating opportunity for new businesses to service all the faculty and students who are going to be out in this area.” Malloy said he is also excited about plans by Cleveland Clinic to building a 100,000-sqaure-foot research facility in the health-care zone that will house the National Diabetes and Obesity Research Institute. “What we are trying to create is a medical city,” Malloy said.