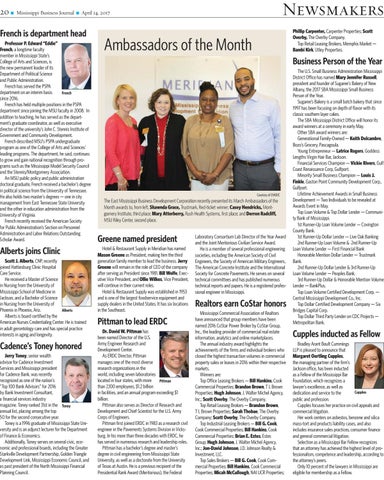 French is department head Professor P. Edward “Eddie” French, a longtime faculty member in Mississippi State’s College of Arts and Sciences, is the new permanent leader of its Department of Political Science and Public Administration. French has served the PSPA department on an interim basis French since 2016. French has held multiple positions in the PSPA department since joining the MSU faculty in 2008. In addition to teaching, he has served as the department’s graduate coordinator, as well as executive director of the university’s John C. Stennis Institute of Government and Community Development. French described MSU’s PSPA undergraduate program as one of the College of Arts and Sciences’ leading programs. The department, he said, continues to grow and gain national recognition through programs such as the Mississippi Model Security Council and the Stennis/Montgomery Association. An MSU public policy and public administration doctoral graduate, French received a bachelor’s degree in political science from the University of Tennessee. He also holds two master’s degrees — one in city management from East Tennessee State University and the other in education administration from the University of Virginia. French recently received the American Society for Public Administration’s Section on Personnel Administration and Labor Relations Outstanding Scholar Award.

Jerry Toney, senior wealth advisor for Cadence Investment Services and Mississippi president for Cadence Bank, was recently recognized as one of the nation’s “Top 100 Bank Advisors” for 2016 by Bank Investment Consultant, a ﬁnancial services industry magazine. Toney ranked 31st in the Toney annual list, placing among the top 50 for the second consecutive year. Toney is a 1996 graduate of Mississippi State University and is an adjunct lecturer for the Department of Finance & Economics. Additionally, Toney serves on several civic, economic and professional boards, including the Greater Starkville Development Partnership, Golden Triangle Development Link, Mississippi Economic Council, and as past president of the North Mississippi Financial Planning Council.

Ambassadors of the Month

Business Person of the Year

Greene named president Hotel & Restaurant Supply in Meridian has named Mason Greene as President, making him the third generation family member to lead the business. Jerry Greene will remain in the role of CEO of the company after serving as President since 1981. Bill Wolfe, Executive Vice President, and Ollie Wilkes, Vice President, will continue in their current roles. Hotel & Restaurant Supply was established in 1953 and is one of the largest foodservice equipment and supply dealers in the United States. It has six locations in the Southeast.

Pittman to lead ERDC Dr. David W. Pittman has been named Director of the U.S. Army Engineer Research and Development Center. As ERDC Director, Pittman manages one of the most diverse research organizations in the world, including seven laboratories located in four states, with more Pittman than 2,100 employees, $1.2 billion in facilities, and an annual program exceeding $1 billion. Pittman also serves as Director of Research and Development and Chief Scientist for the U.S. Army Corps of Engineers. Pittman ﬁrst joined ERDC in 1983 as a research civil engineer in the Pavements Systems Division in Vicksburg. In his more than three decades with ERDC, he has served in numerous research and leadership roles. Pittman has a bachelor’s degree and master’s degree in civil engineering from Mississippi State University, as well as a doctorate from the University of Texas at Austin. He is a previous recipient of the Presidential Rank Award (Meritorious), the Federal

Laboratory Consortium Lab Director of the Year Award and the Joint Meritorious Civilian Service Award. He is a member of several professional engineering societies, including the American Society of Civil Engineers, the Society of American Military Engineers, The American Concrete Institute and the International Society for Concrete Pavements. He serves on several technical committees and has published numerous technical reports and papers. He is a registered professional engineer in Mississippi.

Cupples inducted as Fellow Bradley Arant Boult Cummings LLP is pleased to announce that Margaret Oertling Cupples, the managing partner of the ﬁrm’s Jackson office, has been inducted as a Fellow of the Mississippi Bar Foundation, which recognizes a lawyer’s excellence, as well as Cupples dedication and service to the public and profession. Cupples focuses her practice on civil appeals and commercial litigation. Her work centers on asbestos, benzene and silica mass-tort and products liability cases, and also includes insurance sales practices, consumer ﬁnance and general commercial litigation. Selection as a Mississippi Bar Fellow recognizes that an attorney has achieved the highest level of professionalism, competence and leadership, according to the attorney’s peers. Only 10 percent of the lawyers in Mississippi are eligible for membership as a Fellow.