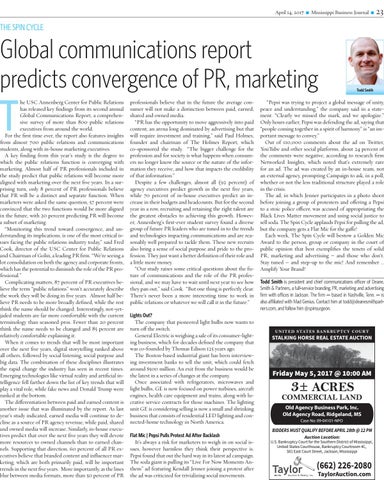 he USC Annenberg Center for Public Relations has released key ﬁndings from its second annual Global Communications Report, a comprehensive survey of more than 800 public relations executives from around the world. For the ﬁrst time ever, the report also features insights from almost 700 public relations and communications students, along with in-house marketing executives. A key ﬁnding from this year’s study is the degree to which the public relations function is converging with marketing. Almost half of PR professionals included in the study predict that public relations will become more aligned with marketing over the next ﬁve years. In a surprising turn, only 8 percent of PR professionals believe that PR will be a distinct and separate function. When marketers were asked the same question, 57 percent were convinced that the two functions would be more aligned in the future, with 20 percent predicting PR will become a subset of marketing. “Monitoring this trend toward convergence, and understanding its implications, is one of the most critical issues facing the public relations industry today,” said Fred Cook, director of the USC Center for Public Relations and Chairman of Golin, a leading PR ﬁrm. “We’re seeing a lot consolidation on both the agency and corporate fronts, which has the potential to diminish the role of the PR professional.” Complicating matters, 87 percent of PR executives believe the term “public relations” won’t accurately describe the work they will be doing in ﬁve years. Almost half believe PR needs to be more broadly deﬁned, while the rest think the name should be changed. Interestingly, not-yetjaded students are far more comfortable with the current terminology than seasoned pros. Fewer than 20 percent think the name needs to be changed and 85 percent are relatively comfortable explaining it. When it comes to trends that will be most important over the next ﬁve years, digital storytelling ranked above all others, followed by social listening, social purpose and big data. The combination of these disciplines illustrates the rapid change the industry has seen in recent times. Emerging technologies like virtual reality and artiﬁcial intelligence fell farther down the list of key trends that will play a vital role, while fake news and Donald Trump were ranked at the bottom. The differentiation between paid and earned content is another issue that was illuminated by the report. As last year’s study indicated, earned media will continue to decline as a source of PR agency revenue, while paid, shared and owned media will increase. Similarly, in-house executives predict that over the next ﬁve years they will devote more resources to owned channels than to earned channels. Supporting that direction, 60 percent of all PR executives believe that branded content and inﬂuencer marketing, which are both primarily paid, will be important trends in the next ﬁve years. More importantly, as the lines blur between media formats, more than 50 percent of PR

professionals believe that in the future the average consumer will not make a distinction between paid, earned, shared and owned media. “PR has the opportunity to move aggressively into paid content, an arena long dominated by advertising but that will require investment and training,” said Paul Holmes, founder and chairman of The Holmes Report, which co-sponsored the study. “The bigger challenge for the profession and for society is what happens when consumers no longer know the source or the nature of the information they receive, and how that impacts the credibility of that information.” Despite a few challenges, almost all (92 percent) of agency executives predict growth in the next ﬁve years, while 70 percent of in-house executives predict an increase in their budgets and headcounts. But for the second year in a row, recruiting and retaining the right talent are the greatest obstacles to achieving this growth. However, Annenberg’s ﬁrst-ever student survey found a diverse group of future PR leaders who are tuned in to the trends and technologies impacting communications and are reasonably well prepared to tackle them. These new recruits also bring a sense of social purpose and pride to the profession. They just want a better deﬁnition of their role and a little more money. “Our study raises some critical questions about the future of communications and the role of the PR professional, and we may have to wait until next year to see how they pan out,” said Cook. “But one thing is perfectly clear. There’s never been a more interesting time to work in public relations or whatever we will call it in the future.” Lights Out? The company that pioneered light bulbs now wants to turn off the switch. General Electric is weighing a sale of its consumer-lighting business, which for decades deﬁned the company that was co-founded by Thomas Edison 125 years ago. The Boston-based industrial giant has been interviewing investment banks to sell the unit, which could fetch around $500 million. An exit from the business would be the latest in a series of changes at the company. Once associated with refrigerators, microwaves and light bulbs, GE is now focused on power turbines, aircraft engines, health care equipment and trains, along with lucrative service contracts for those machines. The lighting unit GE is considering selling is now a small and shrinking business that consists of residential LED lighting and connected-home technology in North America. Flat Mic | Pepsi Pulls Protest Ad After Backlash It’s always a risk for marketers to weigh in on social issues, however harmless they think their perspective is. Pepsi found that out the hard way in its latest ad campaign. The soda giant is pulling its “Live For Now Moments Anthem” ad featuring Kendall Jenner joining a protest after the ad was criticized for trivializing social movements.

“Pepsi was trying to project a global message of unity, peace and understanding,” the company said in a statement. “Clearly we missed the mark, and we apologize.” Only hours earlier, Pepsi was defending the ad, saying that “people coming together in a spirit of harmony” is “an important message to convey.” Out of 110,000 comments about the ad on Twitter, YouTube and other social platforms, about 24 percent of the comments were negative, according to research ﬁrm Networked Insights, which noted that’s extremely rare for an ad. The ad was created by an in-house team, not an external agency, prompting Campaign to ask, in a poll, whether or not the less traditional structure played a role in the crisis. The ad, in which Jenner participates in a photo shoot before joining a group of protesters and offering a Pepsi to a stoic police officer, was accused of appropriating the Black Lives Matter movement and using social justice to sell soda. The Spin Cycle applauds Pepsi for pulling the ad, but the company gets a Flat Mic for the gaffe! Each week, The Spin Cycle will bestow a Golden Mic Award to the person, group or company in the court of public opinion that best exempliﬁes the tenets of solid PR, marketing and advertising – and those who don’t. Stay tuned – and step-up to the mic! And remember … Amplify Your Brand!

Todd Smith is president and chief communications officer of Deane, Smith & Partners, a full-service branding, PR, marketing and advertising ﬁrm with offices in Jackson. The ﬁrm — based in Nashville, Tenn. — is also affiliated with Mad Genius. Contact him at todd@deanesmithpartners.com, and follow him @spinsurgeon.