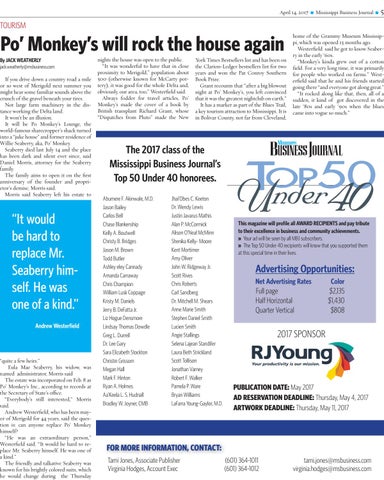 If you drive down a country road a mile or so west of Merigold next summer you might hear some familiar sounds above the crunch of the gravel beneath your tires. Not large farm machinery in the distance working the Delta land. It won’t be an illusion. It will be Po Monkey’s Lounge, the world-famous sharecropper’s shack turned into a “juke house” and former residence of Willie Seaberry, aka, Po’ Monkey. Seaberry died last July 14 and the place has been dark and silent ever since, said Daniel Morris, attorney for the Seaberry family. The family aims to open it on the ﬁrst anniversary of the founder and proprietor’s demise, Morris said. Morris said Seaberry left his estate to

“It would be hard to replace Mr. Seaberry himself. He was one of a kind.” Andrew Westerﬁeld

“quite a few heirs.” Eula Mae Seaberry, his widow, was named administrator, Morris said The estate was incorporated on Feb. 8 as Po’ Monkey’s Inc., according to records at the Secretary of State’s office. “Everybody’s still interested,” Morris said. Andrew Westerﬁeld, who has been mayor of Merigold for 44 years, said the question is: can anyone replace Po’ Monkey himself? “He was an extraordinary person,” Westerﬁeld said. “It would be hard to replace Mr. Seaberry himself. He was one of a kind.” The friendly and talkative Seaberry was known for his brightly colored suits, which he would change during the Thursday

nights the house was open to the public. “It was wonderful to have that in close proximity to Merigold,” population about 500 (otherwise known for McCarty pottery); it was good for the whole Delta and, obviously, our area, too,” Westerﬁeld said. Always fodder for travel articles, Po’ Monkey’s made the cover of a book by British transplant Richard Grant, whose “Dispatches from Pluto” made the New

York Times Bestsellers list and has been on the Clarion-Ledger bestsellers list for two years and won the Pat Conroy Southern Book Prize. Grant recounts that “after a big blowout night at Po’ Monkey’s, you left convinced that it was the greatest nightclub on earth.” It has a marker as part of the Blues Trail, a key tourism attraction to Mississippi. It is in Bolivar County, not far from Cleveland,

home of the Grammy Museum Mississippi, which was opened 13 months ago. Westerﬁeld said he got to know Seaberry in the early ‘60s. “Monkey’s kinda grew out of a cotton ﬁeld. For a very long time, it was primarily for people who worked on farms.” Westerﬁeld said that he and his friends started going there “and everyone got along great.” “It rocked along like that, then, all of a sudden, it kind of got discovered in the late ‘80s and early ‘90s when the blues came into vogue so much.”

This magazine will proﬁle all AWARD RECIPIENTS and pay tribute to their excellence in business and community achievements. » Your ad will be seen by all MBJ subscribers. » The Top 50 Under 40 recipients will know that you supported them at this special time in their lives.