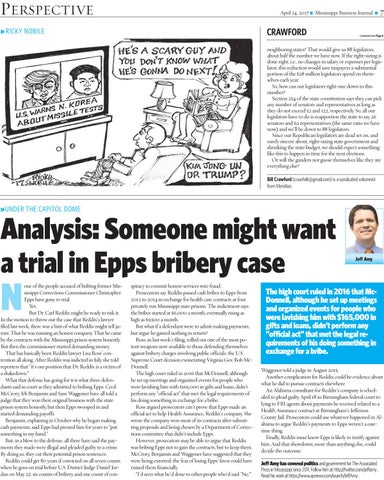 neighboring states? That would give us 88 legislators, about half the number we have now. If the right-sizing is done right, i.e., no changes in salary or expenses per legislator, this reduction would save taxpayers a substantial portion of the $28 million legislators spend on themselves each year. So, how can our legislators right-size down to this number? Section 254 of the state constitution says they can pick any number of senators and representatives as long as they do not exceed 52 and 122, respectively. So, all our legislators have to do is reapportion the state to say 26 senators and 62 representatives (the same ratio we have now) and we’ll be down to 88 legislators. Since our Republican legislators are dead set on, and surely sincere about, right-sizing state government and shrinking the state budget, we should expect something like this to happen in time for the next elections. Or will the ganders not goose themselves like they are everything else? Bill Crawford (crawfolk@gmail.com) is a syndicated columnist from Meridian.

»UNDER THE CAPITOL DOME

Analysis: Someone might want a trial in Epps bribery case

one of the people accused of bribing former Mississippi Corrections Commissioner Christopher Epps have gone to trial. Yet. But Dr. Carl Reddix might be ready to risk it. In the motion to throw out the case that Reddix's lawyer filed last week, there was a hint of what Reddix might tell jurors: That he was running an honest company. That he came by the contracts with the Mississippi prison system honestly. But then the commissioner started demanding money. That has basically been Reddix lawyer Lisa Ross' contention all along. After Reddix was indicted in July, she told reporters that "it's our position that Dr. Reddix is a victim of a shakedown." What that defense has going for it is what three defendants said in court as they admitted to bribing Epps. Cecil McCrory, Irb Benjamin and Sam Waggoner have all told a judge that they won their original business with the state prison system honestly, but then Epps swooped in and started demanding payoffs. Benjamin, explaining in October why he began making cash payments, said Epps had pressed him for years to "put something in my hand." But, in a blow to the defense, all three have said the payments they made were illegal and pleaded guilty to a crime. By doing so, they cut their potential prison sentences. Reddix could get 80 years if convicted on all seven counts when he goes on trial before U.S. District Judge Daniel Jordan on May 22: six counts of bribery and one count of con-

spiracy to commit honest-services wire fraud. Prosecutors say Reddix passed cash bribes to Epps from 2012 to 2014 in exchange for health care contracts at four privately run Mississippi state prisons. The indictment says the bribes started at $6,000 a month, eventually rising as high as $9,500 a month. But what if a defendant were to admit making payments, but argue he gained nothing in return? Ross, in last week's filing, rolled out one of the most potent weapons now available to those defending themselves against bribery charges involving public officials: the U.S. Supreme Court decision exonerating Virginia Gov. Bob McDonnell. The high court ruled in 2016 that McDonnell, although he set up meetings and organized events for people who were lavishing him with $165,000 in gifts and loans, didn't perform any "official act" that met the legal requirements of his doing something in exchange for a bribe. Ross argued prosecutors can't prove that Epps made an official act to help Health Assurance, Reddix's company. She wrote the company won most of its contracts after submitting proposals and being chosen by a Department of Corrections committee that didn't include Epps. However, prosecutors may be able to argue that Reddix was bribing Epps not to gain the contracts, but to keep them. McCrory, Benjamin and Waggoner have suggested that they were being extorted: the fear of losing Epps' favor could have ruined them financially. "I'd seen what he'd done to other people who'd said 'No,'"

The high court ruled in 2016 that McDonnell, although he set up meetings and organized events for people who were lavishing him with $165,000 in gifts and loans, didn't perform any "official act" that met the legal requirements of his doing something in exchange for a bribe. Waggoner told a judge in August 2015. Another complication for Reddix could be evidence about what he did to pursue contracts elsewhere. An Alabama consultant for Reddix's company is scheduled to plead guilty April 18 in Birmingham federal court to lying to FBI agents about payments he received related to a Health Assurance contract at Birmingham's Jefferson County Jail. Prosecutors could use whatever happened in Alabama to argue Reddix's payments to Epps weren't a onetime thing. Finally, Reddix must know Epps is likely to testify against him. And that showdown, more than anything else, could decide the outcome. Jeff Amy has covered politics and government for The Associated Press in Mississippi since 2011. Follow him at: http://twitter.com/jeffamy . Read his work at https://www.apnews.com/search/JeffAmy .