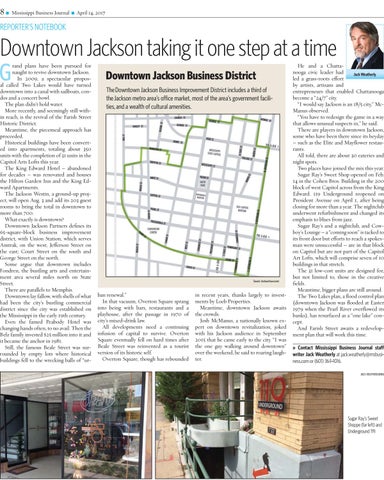 rand plans have been pursued for naught to revive downtown Jackson. In 2009, a spectacular proposal called Two Lakes would have turned downtown into a canal with sailboats, condos and a concert bowl. The plan didn’t hold water. More recently, and seemingly still within reach, is the revival of the Farish Street Historic District. Meantime, the piecemeal approach has proceeded. Historical buildings have been converted into apartments, totaling about 350 units with the completion of 31 units in the Capitol Arts Lofts this year. The King Edward Hotel – abandoned for decades – was renovated and houses the Hilton Garden Inn and the King Edward Apartments. The Jackson Westin, a ground-up project, will open Aug. 3 and add its 203 guest rooms to bring the total in downtown to more than 700. What exactly is downtown? Downtown Jackson Partners deﬁnes its 65-square-block business improvement district, with Union Station, which serves Amtrak, on the west; Jefferson Street on the east; Court Street on the south and George Street on the north. Some argue that downtown includes Fondren, the bustling arts and entertainment area several miles north on State Street. There are parallels to Memphis. Downtown lay fallow, with shells of what had been the city’s bustling commercial district since the city was established on the Mississippi in the early 19th century. Even the famed Peabody Hotel was changing hands often, to no avail. Then the Belz family invested $25 million into it and it became the anchor in 1981. Still, the famous Beale Street was surrounded by empty lots where historical buildings fell to the wrecking balls of “ur-

The Downtown Jackson Business Improvement District includes a third of the Jackson metro area’s office market, most of the area’s government facilities, and a wealth of cultural amenities.

ban renewal.” In that vacuum, Overton Square sprang into being with bars, restaurants and a playhouse, after the passage in 1970 of city’s mixed-drink law. All developments need a continuing infusion of capital to survive. Overton Square eventually fell on hard times after Beale Street was reinvented as a tourist version of its historic self. Overton Square, though has rebounded

in recent years, thanks largely to investments by Loeb Properties. Meantime, downtown Jackson awaits the crowds. Josh McManus, a nationally known expert on downtown revitalization, joked with his Jackson audience in September 2015 that he came early to the city. “I was the one guy walking around downtown” over the weekend, he said to roaring laughter.

He and a Chattanooga civic leader had Jack Weatherly led a grass-roots effort by artists, artisans and entrepreneurs that enabled Chattanooga become a “24/7” city. “I would say Jackson is an 18/5 city,” McManus observed. “You have to redesign the game in a way that allows unusual suspects in,” he said. There are players in downtown Jackson, some who have been there since its heyday – such as the Elite and Mayﬂower restaurants. All told, there are about 30 eateries and night spots. Two places have joined the mix this year. Sugar Ray’s Sweet Shop opened on Feb. 14 in the Cohen Bros. Building in the 200 block of west Capitol across from the King Edward. 119 Underground reopened on President Avenue on April 1, after being closing for more than a year. The nightclub underwent refurbishment and changed its emphasis to blues from jazz. Sugar Ray’s and a nightclub, and Cowboy’s Lounge – a “coming soon” is tacked to its front door but efforts to reach a spokesman were unsuccessful – are in that block on Capitol but are not part of the Capitol Art Lofts, which will comprise seven of 10 buildings in that stretch. The 31 low-cost units are designed for, but not limited to, those in the creative ﬁelds. Meantime, bigger plans are still around. The Two Lakes plan, a ﬂood control plan (downtown Jackson was ﬂooded at Easter 1979 when the Pearl River overﬂowed its banks), has resurfaced as a “one lake” concept. And Farish Street awaits a redevelopment plan that will work this time.