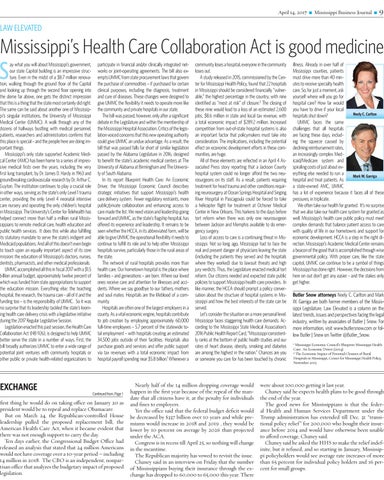 ay what you will about Mississippi’s government, our state Capitol building is an impressive structure. Even in the midst of a $8.7 million renovation, walking through the ground ﬂoor of the Capitol and looking up through the second ﬂoor opening into the dome far above, one gets the distinct impression that this is a thing that the state most certainly did right. The same can be said about another one of Mississippi’s singular institutions, the University of Mississippi Medical Center (UMMC). A walk through any of the dozens of hallways bustling with medical personnel, patients, researchers and administrators conﬁrms that this place is special – and the people here are doing important things. Mississippi’s only state supported Academic Medical Center (AMC) has been home to a series of impressive medical ﬁrsts over the years, including the very ﬁrst lung transplant, by Dr. James D. Hardy in 1963 and groundbreaking cardiovascular research by Dr. Arthur C. Guyton. The institution continues to play a crucial role in other ways, serving as the state’s only Level 1 trauma center, providing the only Level 4 neonatal intensive care nursery and operating the only children’s hospital in Mississippi. The University’s Center for Telehealth has helped connect more than half a million rural Mississippians to remote medical care, health education and public health services. It does this while also fulﬁlling its statutory mandate to serve the state’s indigent and Medicaid populations. And all of this doesn’t even begin to touch upon an equally important aspect of its core mission: the education of Mississippi’s doctors, nurses, dentists, pharmacists, and other medical professionals. UMMC accomplished all this in ﬁscal 2017 with a $1.5 billion annual budget, approximately twelve percent of which was funded from state appropriations to support the education mission. Everything else: the teaching hospital, the research, the trauma care - all of it and the funding too – is the responsibility of UMMC. So it was no surprise that its leadership tackled the state’s looming health care delivery crisis with a legislative initiative during the 2017 Regular Legislative Session. Legislation enacted this past session, the Health Care Collaboration Act (HB 926), is designed to help UMMC better serve the state in a number of ways. First, the bill broadly authorizes UMMC to enter a wide range of potential joint ventures with community hospitals or other public or private health-related organizations to

participate in ﬁnancial and/or clinically integrated networks or joint-operating agreements. The bill also exempts UMMC from state procurement laws that govern the purchase of commodities – if purchased for certain clinical purposes, including the diagnosis, treatment and cure of diseases. These changes were designed to give UMMC the ﬂexibility it needs to operate more like the community and private hospitals in our state. The bill was passed, however, only after a signiﬁcant debate in the Legislature and within the membership of the Mississippi Hospital Association. Critics of the legislation voiced concerns that this new operating authority could give UMMC an undue advantage. As a result, the bill that was passed falls far short of similar legislation passed by the Alabama Legislature in 2016, designed to beneﬁt the state’s academic medical centers at The University of Alabama at Birmingham and The University of South Alabama. In its report Blueprint Health Care: An Economic Driver, the Mississippi Economic Council describes strategic initiatives that support Mississippi’s health care delivery system. Fewer regulatory restraints, more public/private collaboration and enhancing access to care made the list. We need vision and leadership going forward and UMMC, as the state’s ﬂagship hospital, has offered its experience and leadership. It remains to be seen whether the HCCA, in its abbreviated form, will be able to give UMMC the operational ﬂexibility it needs to continue to fulﬁll its role and to help other Mississippi hospitals survive, particularly those in the rural areas of the state. The network of rural hospitals provides more than health care. Our hometown hospital is the place where families – and generations – are born. Where our loved ones receive care and attention for illnesses and accidents. Where we say goodbye to our fathers, mothers and soul mates. Hospitals are the lifeblood of a community. Hospitals are often one of the largest employers in a county. As a vital economic engine, hospitals contribute to job creation by employing approximately 60,000 full-time employees – 5.7 percent of the statewide total employment – with hospitals creating an estimated 34,500 jobs outside of their facilities. Hospitals also purchase goods and services and offer public support via tax revenues with a total economic impact from hospital payroll spending near $5.8 billion.1 Whenever a

ﬁrst thing he would do on taking office on January 20 as president would be to repeal and replace Obamacare. But on March 24, the Republican-controlled House leadership pulled the proposed replacement bill, the American Health Care Act, when it became evident that there was not enough support to carry the day. Ten days earlier, the Congressional Budget Office had released an analysis that stated that 24 million Americans would not have coverage over a 10-year period – including 14 million in 2018. The CBO is an independent, nonpartisan office that analyzes the budgetary impact of proposed legislation.

community loses a hospital, everyone in the community loses out. A study released in 2015, commissioned by the Center for Mississippi Health Policy, found that 22 hospitals in Mississippi should be considered ﬁnancially “vulnerable,” the highest percentage in the country, with nine identiﬁed as “most at risk” of closure.2 The closing of these nine would lead to a loss of an estimated 2,600 jobs, $8.6 million in state and local tax revenue, with a total economic impact of $289.2 million. Increased competition from out-of-state hospital systems is also an important factor that policymakers must take into consideration. The implications, including the potential effect on economic development efforts in these communities, are huge. All of these elements are reﬂected in an April 4 Associated Press story reporting that a Jackson County hospital system could no longer afford the two neurosurgeons on its staff. As a result, patients requiring treatment for head trauma and other conditions requiring neurosurgery at Ocean Springs Hospital and Singing River Hospital in Pascagoula could be forced to take a helicopter ﬂight for treatment at Ochsner Medical Center in New Orleans. This harkens to the days before tort reform when there was only one neurosurgeon between Jackson and Memphis available to do emergency surgery. Loss of access to care is a continuing threat in Mississippi. Not so long ago, Mississippi had to face the real and present danger of physicians leaving the state (including the patients they served and the hospitals where they worked) due to lawsuit threats and high jury verdicts. Thus, the Legislature enacted medical tort reform. Our citizens needed and expected state public policies to support Mississippi health care providers. In like manner, the HCCA should prompt a policy conversation about the structure of hospital systems in Mississippi and how the best interests of the state can be served. Let’s consider the situation on a more personal level. Mississippi faces staggering health care demands. According to the Mississippi State Medical Association’s 2016 Public Health Report Card, “Mississippi consistently ranks at the bottom of public health studies and our rates of heart disease, obesity, smoking and diabetes are among the highest in the nation.” Chances are you or someone you care for has been touched by chronic

Nearly half of the 14 million dropping coverage would happen in the ﬁrst year because of the repeal of the mandate that all citizens have it, at the penalty for individuals and ﬁnes to employers. Yet the office said that the federal budget deﬁcit would be decreased by $337 billion over 10 years and while premiums would increase in 2018 and 2019 , they would be lower by 10 percent on average by 2026 than projected under the ACA. Congress is in recess till April 25, so nothing will change in the meantime. The Republican majority has vowed to revisit the issue. Chaney said in an interview on Friday that the number of Mississippians buying their insurance through the exchange has dropped to 60,000 to 65,000 this year. There

illness. Already in over half of Mississippi counties, patients must drive more than 40 minutes to receive specialty health care. So, for just a moment, ask yourself where will you go for hospital care? How far would you have to drive if your local Neely C. Carlton hospitals shut down? UMMC faces the same challenges that all hospitals are facing these days, including the squeeze caused by declining reimbursement rates, an increasingly complex Medicaid/Medicare system and spiraling costs of just about everything else needed to run a Mark W. Garriga hospital and treat patients. As a state-owned AMC, UMMC has a lot of experience because it faces all of these pressures, in triplicate. We often take our health for granted. It’s no surprise that we also take our health care system for granted as well. Mississippi’s health care public policy must meet complex demands that balance patient access to care with quality of life in our hometowns and support for economic development. HCCA is a step in the right direction. Mississippi’s Academic Medical Center remains a beacon of the good that is accomplished through wise governmental policy. With proper care, like the state capitol, UMMC can continue to be a symbol of things Mississippi has done right. However, the decisions from here on out don’t get any easier - and the stakes only get higher.

were about 100,000 getting it last year. Chaney said he expects health plans to be good through the end of the year. The good news for Mississippians is that the federal Health and Human Services Department under the Trump administration has extended till Dec. 31 “transitional policy relief” for 200,000 who bought their insurance before 2014 and would have otherwise been unable to afford coverage, Chaney said. Chaney said he asked the HHS to make the relief indefinite, but it refused, and so starting in January, Mississippi policyholders would see average rate increases of more than 65 percent for individual policy holders and 16 percent for small groups.