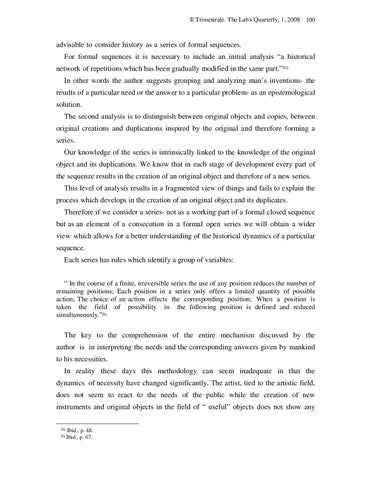 advisable to consider history as a series of formal sequences. For formal sequences it is necessary to include an initial analysis “a historical network of repetitions which has been gradually modified in the same part.”80 In other words the author suggests grouping and analyzing man’s inventions- the results of a particular need or the answer to a particular problem- as an epistemological solution. The second analysis is to distinguish between original objects and copies, between original creations and duplications inspired by the original and therefore forming a series. Our knowledge of the series is intrinsically linked to the knowledge of the original object and its duplications. We know that in each stage of development every part of the sequenze results in the creation of an original object and therefore of a new series. This level of analysis results in a fragmented view of things and fails to explain the process which develops in the creation of an original object and its duplicates. Therefore if we consider a series- not as a working part of a formal closed sequence but as an element of a consecution in a formal open series we will obtain a wider view which allows for a better understanding of the historical dynamics of a particular sequence. Each series has rules which identify a group of variables: “ In the course of a finite, irreversible series the use of any position reduces the number of remaining positions; Each position in a series only offers a limited quantity of possible action; The choice of an action effects the corresponding position; When a position is taken the field of possibility in the following position is defined and reduced simultaneously.”81

The key to the comprehension of the entire mechanism discussed by the author is in interpreting the needs and the corresponding answers given by mankind to his necessities. In reality these days this methodology can seem inadequate in that the dynamics of necessity have changed significantly. The artist, tied to the artistic field, does not seem to react to the needs of the public while the creation of new instruments and original objects in the field of “ useful” objects does not show any 80 81