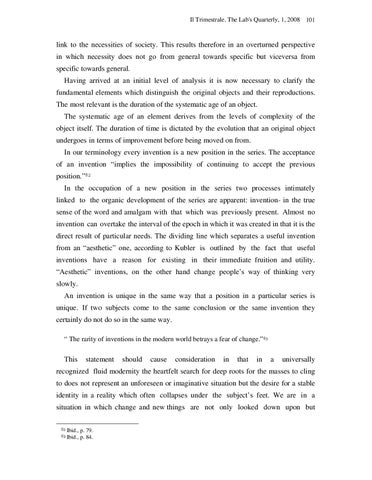 link to the necessities of society. This results therefore in an overturned perspective in which necessity does not go from general towards specific but viceversa from specific towards general. Having arrived at an initial level of analysis it is now necessary to clarify the fundamental elements which distinguish the original objects and their reproductions. The most relevant is the duration of the systematic age of an object. The systematic age of an element derives from the levels of complexity of the object itself. The duration of time is dictated by the evolution that an original object undergoes in terms of improvement before being moved on from. In our terminology every invention is a new position in the series. The acceptance of an invention “implies the impossibility of continuing to accept the previous position.”82 In the occupation of a new position in the series two processes intimately linked to the organic development of the series are apparent: invention- in the true sense of the word and amalgam with that which was previously present. Almost no invention can overtake the interval of the epoch in which it was created in that it is the direct result of particular needs. The dividing line which separates a useful invention from an “aesthetic” one, according to Kubler is outlined by the fact that useful inventions have a reason for existing in their immediate fruition and utility. “Aesthetic” inventions, on the other hand change people’s way of thinking very slowly. An invention is unique in the same way that a position in a particular series is unique. If two subjects come to the same conclusion or the same invention they certainly do not do so in the same way. “ The rarity of inventions in the modern world betrays a fear of change.”83

recognized fluid modernity the heartfelt search for deep roots for the masses to cling to does not represent an unforeseen or imaginative situation but the desire for a stable identity in a reality which often collapses under the subject’s feet. We are in a situation in which change and new things are not only looked down upon but 82 83