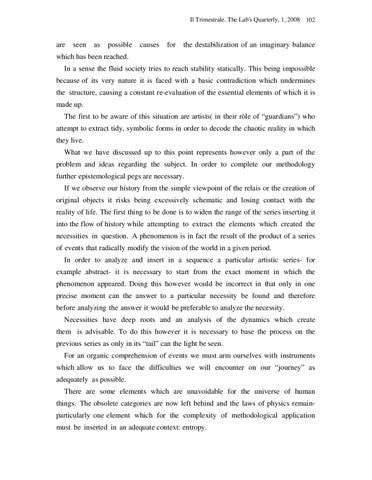 the destabilization of an imaginary balance

which has been reached. In a sense the fluid society tries to reach stability statically. This being impossible because of its very nature it is faced with a basic contradiction which undermines the structure, causing a constant re-evaluation of the essential elements of which it is made up. The first to be aware of this situation are artists( in their ròle of “guardians”) who attempt to extract tidy, symbolic forms in order to decode the chaotic reality in which they live. What we have discussed up to this point represents however only a part of the problem and ideas regarding the subject. In order to complete our methodology further epistemological pegs are necessary. If we observe our history from the simple viewpoint of the relais or the creation of original objects it risks being excessively schematic and losing contact with the reality of life. The first thing to be done is to widen the range of the series inserting it into the flow of history while attempting to extract the elements which created the necessities in question. A phenomenon is in fact the result of the product of a series of events that radically modify the vision of the world in a given period. In order to analyze and insert in a sequence a particular artistic series- for example abstract- it is necessary to start from the exact moment in which the phenomenon appeared. Doing this however would be incorrect in that only in one precise moment can the answer to a particular necessity be found and therefore before analyzing the answer it would be preferable to analyze the necessity. Necessities have deep roots and an analysis of the dynamics which create them is advisable. To do this however it is necessary to base the process on the previous series as only in its “tail” can the light be seen. For an organic comprehension of events we must arm ourselves with instruments which allow us to face the difficulties we will encounter on our “journey” as adequately as possible. There are some elements which are unavoidable for the universe of human things. The obsolete categories are now left behind and the laws of physics remainparticularly one element which for the complexity of methodological application must be inserted in an adequate context: entropy.