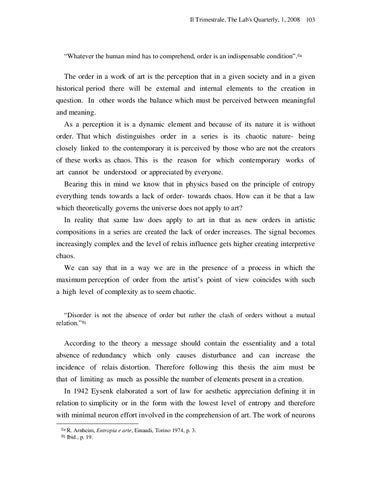 “Whatever the human mind has to comprehend, order is an indispensable condition”.84

The order in a work of art is the perception that in a given society and in a given historical period there will be external and internal elements to the creation in question. In other words the balance which must be perceived between meaningful and meaning. As a perception it is a dynamic element and because of its nature it is without order. That which distinguishes order in a series is its chaotic nature- being closely linked to the contemporary it is perceived by those who are not the creators of these works as chaos. This is the reason for which contemporary works of art cannot be understood or appreciated by everyone. Bearing this in mind we know that in physics based on the principle of entropy everything tends towards a lack of order- towards chaos. How can it be that a law which theoretically governs the universe does not apply to art? In reality that same law does apply to art in that as new orders in artistic compositions in a series are created the lack of order increases. The signal becomes increasingly complex and the level of relais influence gets higher creating interpretive chaos. We can say that in a way we are in the presence of a process in which the maximum perception of order from the artist’s point of view coincides with such a high level of complexity as to seem chaotic. “Disorder is not the absence of order but rather the clash of orders without a mutual relation.”85

According to the theory a message should contain the essentiality and a total absence of redundancy which only causes disturbance and can increase the incidence of relais distortion. Therefore following this thesis the aim must be that of limiting as much as possible the number of elements present in a creation. In 1942 Eysenk elaborated a sort of law for aesthetic appreciation defining it in relation to simplicity or in the form with the lowest level of entropy and therefore with minimal neuron effort involved in the comprehension of art. The work of neurons 84 85