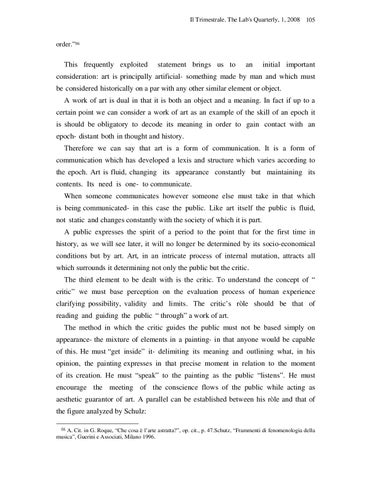 statement brings us to

consideration: art is principally artificial- something made by man and which must be considered historically on a par with any other similar element or object. A work of art is dual in that it is both an object and a meaning. In fact if up to a certain point we can consider a work of art as an example of the skill of an epoch it is should be obligatory to decode its meaning in order to gain contact with an epoch- distant both in thought and history. Therefore we can say that art is a form of communication. It is a form of communication which has developed a lexis and structure which varies according to the epoch. Art is fluid, changing its appearance constantly but maintaining its contents. Its need is one- to communicate. When someone communicates however someone else must take in that which is being communicated- in this case the public. Like art itself the public is fluid, not static and changes constantly with the society of which it is part. A public expresses the spirit of a period to the point that for the first time in history, as we will see later, it will no longer be determined by its socio-economical conditions but by art. Art, in an intricate process of internal mutation, attracts all which surrounds it determining not only the public but the critic. The third element to be dealt with is the critic. To understand the concept of “ critic” we must base perception on the evaluation process of human experience clarifying possibility, validity and limits. The critic’s ròle should be that of reading and guiding the public “ through” a work of art. The method in which the critic guides the public must not be based simply on appearance- the mixture of elements in a painting- in that anyone would be capable of this. He must “get inside” it- delimiting its meaning and outlining what, in his opinion, the painting expresses in that precise moment in relation to the moment of its creation. He must “speak” to the painting as the public “listens”. He must encourage the meeting of the conscience flows of the public while acting as aesthetic guarantor of art. A parallel can be established between his ròle and that of the figure analyzed by Schulz: 86 A. Cit. in G. Roque, “Che cosa è l’arte astratta?”, op. cit., p. 47.Schutz, “Frammenti di fenomenologia della musica”, Guerini e Associati, Milano 1996.