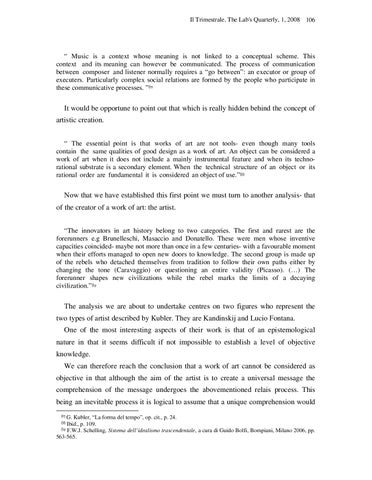 “ Music is a context whose meaning is not linked to a conceptual scheme. This context and its meaning can however be communicated. The process of communication between composer and listener normally requires a “go between”: an executor or group of executers. Particularly complex social relations are formed by the people who participate in these communicative processes. ”87

It would be opportune to point out that which is really hidden behind the concept of artistic creation. “ The essential point is that works of art are not tools- even though many tools contain the same qualities of good design as a work of art. An object can be considered a work of art when it does not include a mainly instrumental feature and when its technorational substrate is a secondary element. When the technical structure of an object or its rational order are fundamental it is considered an object of use.”88

Now that we have established this first point we must turn to another analysis- that of the creator of a work of art: the artist. “The innovators in art history belong to two categories. The first and rarest are the forerunners e.g Brunelleschi, Masaccio and Donatello. These were men whose inventive capacities coincided- maybe not more than once in a few centuries- with a favourable moment when their efforts managed to open new doors to knowledge. The second group is made up of the rebels who detached themselves from tradition to follow their own paths either by changing the tone (Caravaggio) or questioning an entire validity (Picasso). (…) The forerunner shapes new civilizations while the rebel marks the limits of a decaying civilization.”89

The analysis we are about to undertake centres on two figures who represent the two types of artist described by Kubler. They are Kandinskij and Lucio Fontana. One of the most interesting aspects of their work is that of an epistemological nature in that it seems difficult if not impossible to establish a level of objective knowledge. We can therefore reach the conclusion that a work of art cannot be considered as objective in that although the aim of the artist is to create a universal message the comprehension of the message undergoes the abovementioned relais process. This being an inevitable process it is logical to assume that a unique comprehension would 87