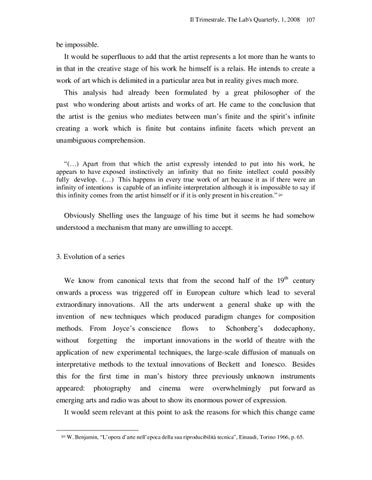 be impossible. It would be superfluous to add that the artist represents a lot more than he wants to in that in the creative stage of his work he himself is a relais. He intends to create a work of art which is delimited in a particular area but in reality gives much more. This analysis had already been formulated by a great philosopher of the past who wondering about artists and works of art. He came to the conclusion that the artist is the genius who mediates between man’s finite and the spirit’s infinite creating a work which is finite but contains infinite facets which prevent an unambiguous comprehension. “(…) Apart from that which the artist expressly intended to put into his work, he appears to have exposed instinctively an infinity that no finite intellect could possibly fully develop. (…) This happens in every true work of art because it as if there were an infinity of intentions is capable of an infinite interpretation although it is impossible to say if this infinity comes from the artist himself or if it is only present in his creation.” 90

Obviously Shelling uses the language of his time but it seems he had somehow understood a mechanism that many are unwilling to accept.

3. Evolution of a series We know from canonical texts that from the second half of the 19th century onwards a process was triggered off in European culture which lead to several extraordinary innovations. All the arts underwent a general shake up with the invention of new techniques which produced paradigm changes for composition methods. From Joyce’s conscience without

important innovations in the world of theatre with the

application of new experimental techniques, the large-scale diffusion of manuals on interpretative methods to the textual innovations of Beckett and Ionesco. Besides this for the first time in man’s history three previously unknown instruments appeared:

emerging arts and radio was about to show its enormous power of expression. It would seem relevant at this point to ask the reasons for which this change came 90