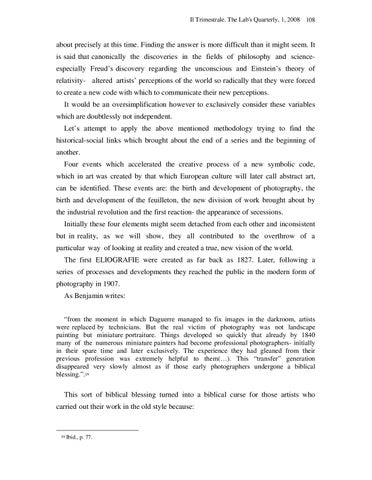 about precisely at this time. Finding the answer is more difficult than it might seem. It is said that canonically the discoveries in the fields of philosophy and scienceespecially Freud’s discovery regarding the unconscious and Einstein’s theory of relativity- altered artists’ perceptions of the world so radically that they were forced to create a new code with which to communicate their new perceptions. It would be an oversimplification however to exclusively consider these variables which are doubtlessly not independent. Let’s attempt to apply the above mentioned methodology trying to find the historical-social links which brought about the end of a series and the beginning of another. Four events which accelerated the creative process of a new symbolic code, which in art was created by that which European culture will later call abstract art, can be identified. These events are: the birth and development of photography, the birth and development of the feuilleton, the new division of work brought about by the industrial revolution and the first reaction- the appearance of secessions. Initially these four elements might seem detached from each other and inconsistent but in reality, as we will show, they all contributed to the overthrow of a particular way of looking at reality and created a true, new vision of the world. The first ELIOGRAFIE were created as far back as 1827. Later, following a series of processes and developments they reached the public in the modern form of photography in 1907. As Benjamin writes: “from the moment in which Daguerre managed to fix images in the darkroom, artists were replaced by technicians. But the real victim of photography was not landscape painting but miniature portraiture. Things developed so quickly that already by 1840 many of the numerous miniature painters had become professional photographers- initially in their spare time and later exclusively. The experience they had gleaned from their previous profession was extremely helpful to them(…). This “transfer” generation disappeared very slowly almost as if those early photographers undergone a biblical blessing.”.91

This sort of biblical blessing turned into a biblical curse for those artists who carried out their work in the old style because: