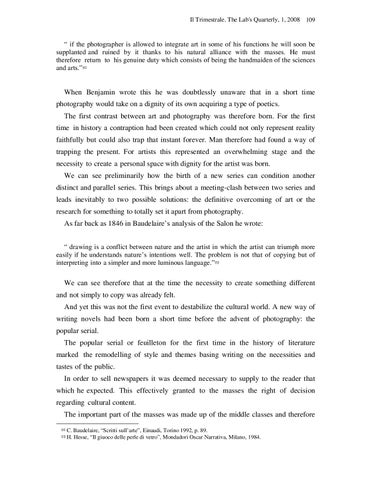 “ if the photographer is allowed to integrate art in some of his functions he will soon be supplanted and ruined by it thanks to his natural alliance with the masses. He must therefore return to his genuine duty which consists of being the handmaiden of the sciences and arts.”92

When Benjamin wrote this he was doubtlessly unaware that in a short time photography would take on a dignity of its own acquiring a type of poetics. The first contrast between art and photography was therefore born. For the first time in history a contraption had been created which could not only represent reality faithfully but could also trap that instant forever. Man therefore had found a way of trapping the present. For artists this represented an overwhelming stage and the necessity to create a personal space with dignity for the artist was born. We can see preliminarily how the birth of a new series can condition another distinct and parallel series. This brings about a meeting-clash between two series and leads inevitably to two possible solutions: the definitive overcoming of art or the research for something to totally set it apart from photography. As far back as 1846 in Baudelaire’s analysis of the Salon he wrote: “ drawing is a conflict between nature and the artist in which the artist can triumph more easily if he understands nature’s intentions well. The problem is not that of copying but of interpreting into a simpler and more luminous language.”93

We can see therefore that at the time the necessity to create something different and not simply to copy was already felt. And yet this was not the first event to destabilize the cultural world. A new way of writing novels had been born a short time before the advent of photography: the popular serial. The popular serial or feuilleton for the first time in the history of literature marked the remodelling of style and themes basing writing on the necessities and tastes of the public. In order to sell newspapers it was deemed necessary to supply to the reader that which he expected. This effectively granted to the masses the right of decision regarding cultural content. The important part of the masses was made up of the middle classes and therefore 92 93