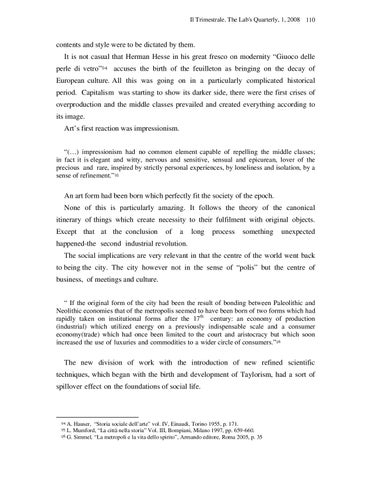 contents and style were to be dictated by them. It is not casual that Herman Hesse in his great fresco on modernity “Giuoco delle perle di vetro”94 accuses the birth of the feuilleton as bringing on the decay of European culture. All this was going on in a particularly complicated historical period. Capitalism was starting to show its darker side, there were the first crises of overproduction and the middle classes prevailed and created everything according to its image. Art’s first reaction was impressionism. “(…) impressionism had no common element capable of repelling the middle classes; in fact it is elegant and witty, nervous and sensitive, sensual and epicurean, lover of the precious and rare, inspired by strictly personal experiences, by loneliness and isolation, by a sense of refinement.”95

An art form had been born which perfectly fit the society of the epoch. None of this is particularly amazing. It follows the theory of the canonical itinerary of things which create necessity to their fulfilment with original objects. Except that at the conclusion

happened-the second industrial revolution. The social implications are very relevant in that the centre of the world went back to being the city. The city however not in the sense of “polis” but the centre of business, of meetings and culture. “ If the original form of the city had been the result of bonding between Paleolithic and Neolithic economies that of the metropolis seemed to have been born of two forms which had rapidly taken on institutional forms after the 17th century: an economy of production (industrial) which utilized energy on a previously indispensable scale and a consumer economy(trade) which had once been limited to the court and aristocracy but which soon increased the use of luxuries and commodities to a wider circle of consumers.”96

The new division of work with the introduction of new refined scientific techniques, which began with the birth and development of Taylorism, had a sort of spillover effect on the foundations of social life.