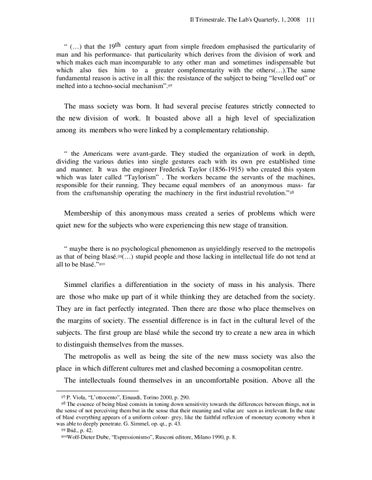 “ (…) that the 19th century apart from simple freedom emphasised the particularity of man and his performance- that particularity which derives from the division of work and which makes each man incomparable to any other man and sometimes indispensable but which also ties him to a greater complementarity with the others(…).The same fundamental reason is active in all this: the resistance of the subject to being “levelled out” or melted into a techno-social mechanism”.97

The mass society was born. It had several precise features strictly connected to the new division of work. It boasted above all a high level of specialization among its members who were linked by a complementary relationship. “ the Americans were avant-garde. They studied the organization of work in depth, dividing the various duties into single gestures each with its own pre established time and manner. It was the engineer Frederick Taylor (1856-1915) who created this system which was later called “Taylorism” . The workers became the servants of the machines, responsible for their running. They became equal members of an anonymous mass- far from the craftsmanship operating the machinery in the first industrial revolution.”98

Membership of this anonymous mass created a series of problems which were quiet new for the subjects who were experiencing this new stage of transition. “ maybe there is no psychological phenomenon as unyieldingly reserved to the metropolis as that of being blasé.99(…) stupid people and those lacking in intellectual life do not tend at all to be blasé.”100

Simmel clarifies a differentiation in the society of mass in his analysis. There are those who make up part of it while thinking they are detached from the society. They are in fact perfectly integrated. Then there are those who place themselves on the margins of society. The essential difference is in fact in the cultural level of the subjects. The first group are blasé while the second try to create a new area in which to distinguish themselves from the masses. The metropolis as well as being the site of the new mass society was also the place in which different cultures met and clashed becoming a cosmopolitan centre. The intellectuals found themselves in an uncomfortable position. Above all the 97

P. Viola, “L’ottocento”, Einaudi, Torino 2000, p. 290. The essence of being blasè consists in toning down sensitivity towards the differences between things, not in the sense of not perceiving them but in the sense that their meaning and value are seen as irrelevant. In the state of blasé everything appears of a uniform colour- grey, like the faithful reflexion of monetary economy when it was able to deeply penetrate. G. Simmel, op. qt., p. 43. 99 Ibid., p. 42. 100Wolf-Dieter Dube, “Espressionismo”, Rusconi editore, Milano 1990, p. 8. 98