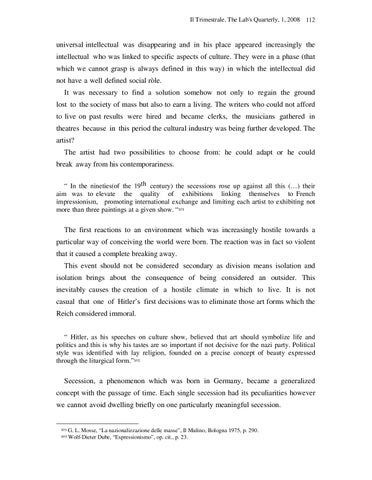 universal intellectual was disappearing and in his place appeared increasingly the intellectual who was linked to specific aspects of culture. They were in a phase (that which we cannot grasp is always defined in this way) in which the intellectual did not have a well defined social ròle. It was necessary to find a solution somehow not only to regain the ground lost to the society of mass but also to earn a living. The writers who could not afford to live on past results were hired and became clerks, the musicians gathered in theatres because in this period the cultural industry was being further developed. The artist? The artist had two possibilities to choose from: he could adapt or he could break away from his contemporariness. “ In the nineties(of the 19th century) the secessions rose up against all this (…) their aim was to elevate the quality of exhibitions linking themselves to French impressionism, promoting international exchange and limiting each artist to exhibiting not more than three paintings at a given show. “101

The first reactions to an environment which was increasingly hostile towards a particular way of conceiving the world were born. The reaction was in fact so violent that it caused a complete breaking away. This event should not be considered secondary as division means isolation and isolation brings about the consequence of being considered an outsider. This inevitably causes the creation of a hostile climate in which to live. It is not casual that one of Hitler’s first decisions was to eliminate those art forms which the Reich considered immoral. “ Hitler, as his speeches on culture show, believed that art should symbolize life and politics and this is why his tastes are so important if not decisive for the nazi party. Political style was identified with lay religion, founded on a precise concept of beauty expressed through the liturgical form.”102

Secession, a phenomenon which was born in Germany, became a generalized concept with the passage of time. Each single secession had its peculiarities however we cannot avoid dwelling briefly on one particularly meaningful secession.